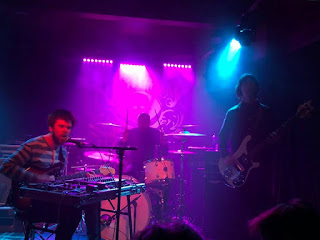 Déjà Vega livened up a dark wet Manchester Saturday night with a barnstorming six-song half-hour set at the Night And Day Cafe. Starting with a new song that doesn't feature on their forthcoming debut album and finishing with Jack crowdsurfing, their raw power simply blew away the audience.

Like fellow noise merchants Ist Ist, Déjà Vega are one of the unsung heroes on the Manchester scene at the moment. Seemingly around forever, prolific at gigging and a go-to support for many touring bands aware of exactly what they deliver every time, tonight they're supporting Mugstar, quite a contrast but that's nothing that concerns them overtly.

They start the set with Jack seated for a track that's just entitled "New Synth Tune" which is a bit of a departure for them from the full-on onslaught of some of their other songs, but whilst it doesn't have the same emphasis on Jack's ferocious guitars throughout, it still packs the punch that has become their calling card. Mike's bass, which looks effortless in its execution, as if he's just playing around with it, and Tom's increasingly tribal raging drums often get overlooked by Jack's shredding guitars and almost demonic delivery, but tonight they come into their own as the Night And Day's sound, almost always on the mark, allows us to hear and appreciate everything.

The rest of the set comprises of five songs from their forthcoming debut album. First up is Eyes Of Steel with its thunderous opening and choruses separated by verses where the vocals and changes in pace act like knives slashing and cutting at the listeners. Mr Powder has the audience transfixed on Jack's fretboard as it moves in a flash from top to bottom. For something with such ferocity and volume behind it though, there's also a lot of space to appreciate the way the three of them combine and at points display a dexterity and subtlety you wouldn't usually associate with something being played at this speed and volume. 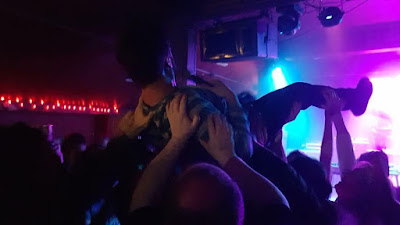 Jack introduces Vor Gazen as the first time they've ever played it and that it's a little bit slower. By the time it reaches the end though it's still got that explosive energy that sits at the core of each and every Déjà Vega song. Yet it also convinces us that the album is set to have some moments with the feet off the accelerator pedal where they can seduce us with something a little less full on. Pentagrams though has it pushed down full to the floor, the single delivered with even more imperious intent than ever before, giving us the feeling that the band are on a mission now, fueled by the album's delay into channeling every frustration into these live shows.

They finish with The Test, a song that seems to grow and become wilder and more adventurous each time they play it. It must last close to fifteen minutes as it contains more ideas that most bands have in a whole set, jumping from sections that are overwhelming walls of noise to subtle almost not there parts and then exploding back into life. Jack looks possessed, appropriate for Halloween, standing on the monitors and then jumping face first onto us where he's held up for a couple of minutes while he continues singing.

Déjà Vega are one of those bands you have witness live to get the full picture. You could never hope to create the one-off experience of something like The Test, different every time they play it, on a slab of black vinyl. The deafening response they get at the end of their set told its own story, they might be one of the best kept secrets on the local scene still, but they're also one of the most loved. And for half an hour they showed us exactly why.