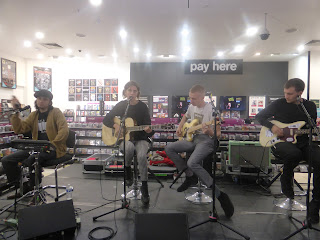 With their second album Visions Of A Life challenging for the number one spot and enjoying the patronage of Jeremy Corbyn en route, Wolf Alice are also on a whistle-stop tour of record shops to promote the record and perform tracks acoustically. We caught up with their set at Manchester HMV on Thursday evening.

Wolf Alice's rise has been an impressive one that's come up on the rails. Without massive hype behind them, their debut album My Love Is Cool set the scene for Visions Of A Life to catapult them towards venues the size of Manchester Apollo and Alexandra Palace in London next month on their tour, so it's no surprise to see the top floor of HMV in the Arndale Centre packed out well in advance of the band's arrival.

As is the norm at these events, the set is stripped down and only features an insight into the band's new record. Of the five songs played, Sadboy, Space And Time, Beautifully Unconventional and Don't Delete The Kisses are four from the new record, with only crowd favourite Bros from the debut making its way into the set. That doesn't seem to bother the audience though who seem to know every word to every song even though the record has been out less than a week.

It's immediately clear though why Wolf Alice have made such a massive step with this record. These are songs that make a real connection to this predominantly young audience. Sadboy talks of the perils of growing up these days, the need to be seen to be strong, but overthinking and admitting "I was just waiting for this not to hurt." These are sentiments that apply equally to female or male, young and old and are delivered with a warmth but also a resignation by Ellie.

They joke that they feel like Westlife sat on the Ikea stools that HMV have provided (other than drummer Joel, who as well as being deprived of a full kit, also gets "a shit stool"), but this stripped-down format only exposes further the insecurities in the lyrics. Don't Delete The Kisses is perhaps the first song in a really long time to capture that uncertainty of when you meet someone and you don't quite know the score. It's delivered with Ellie almost reciting the verses as a Streets-style stream of consciousness and then letting her voice loose on the higher notes in the chorus. It's a genuinely brilliant reinvention of their own song.

Beautifully Unconventional and Space And Time leave us with a similar impression, that Visions Of A Life is a genuine breakthrough record, not just for commercial reasons, but one that breaks the mould of all-boy bands at the forefront of their generation.