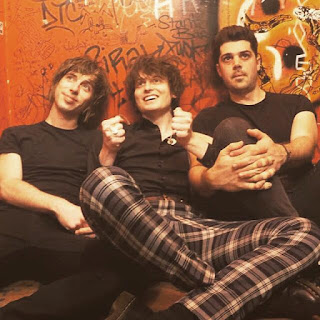 Welsh trio Trampolene release their long-awaited debut LP Swansea To Hornsey via Pledge Music next week ahead of a This Feeling tour in November and a series of Liam Gallagher support slots in December. We caught up with front man Jack Jones to talk about what took them so long, how they chose the tracklisting after multiple EPs, his poetry and supporting the likes of The Libertines and Liam Gallagher.

It’s four years since you announced yourselves with My Bourgeouisie Girl. Does it feel like a relief to be finally releasing an album after so long?

It's mad how time flies, isn't it? We are very proud of the album, there have been times when we never thought it would be released and when Wayne and I first listened to the finished album, tears did flow - in a good way. Yeah it is relief...thank fuck for that.

The album Swansea To Hornsey was named after an early song that doesn’t appear on the album. What was the thinking behind naming the album?

The album is our story of growing up in Wales and moving to London… Coronation Street to the city in Blade Runner by way of the M4. In other words from A to Z via K and everywhere, including E,  in between.

The tracklisting mixes a number of re-recordings of EP tracks as well as new songs. How did you decide what made the album and what not?

We asked fans to pick their favourites to slot in with the new songs...everyone got involved creating their own albums…which was fun. We have some incredible fans and the albums for them..so it made sense...what better way is there to thank them?

There’s three poems - Artwork Of Youth, Ketamine and Pound Land - on the album. Does it frustrate you as a band that often more emphasis is placed on these than the songs around them?

We're grateful to them because they brought people to the band. We knew we had to develop and do something a bit different and as I’m not from LA and couldn’t rap, we came up with our own form of spoken word/Welsh rap about everyday life in the UK in the naughties, When people come to see us live they know the songs as well as the poems and all join in…it’s a beautiful thing.

Artwork Of Youth is about firsts that happened in Jack’s youth and there’s a line “Growing up true is hard to do” on Gangway. It does feel like experiences do shape a lot of the lyrics. What else inspires the words that appear in the songs?

Experience inspires everything...life just happens...You never really learn anything unless you experience it for yourself for better or for worse and I find it is really difficult to go through life remaining true to yourself.

You’ve a dedicated and growing fan base that’s grown as Jack’s toured with Pete Doherty. What’s the strangest experience you’ve had?

I've had a few strange ones...at Trampolene’s last show there were people who had flown in from all over (Japan, Germany, France, Netherlands, Australia). I was really humbled...a girl came on stage and sang ‘Beautiful Pain’ with us and it was brilliant...the song works as a duet (who’d have thought it)…there was a guy that had made me a guitar and also a lovely girl who had travelled from Japan and when I walked into the venue for soundcheck she ran over to me screaming and crying and hugging me…at first I thought maybe she thought I was Peter...she was very sweet we had a good chat...She's been spreading the word for us in Japan...Apparently we are Big in Japan…hahaha.

The big recent news, other than the album, is the announcement of tour dates with Liam Gallagher in December in arenas around the country. Are you excited / nervous / terrified about these?

All of the above, but mainly we are very excited...almost in awe of the excitement...you could say. LG and Peter are, in my opinion, the biggest Rock stars in the world today.

You’re also playing some intimate shows of your own in November with This Feeling. You’ve played some pretty long sets for them over the summer in London. Can we expect this in the rest of the country?

I hope so...we are a fans band...we play for as long as we can for anyone who is there…that is unless the venue manger switches off the power…which has happened more than once.

Finally, some of our readers may not be aware of you. How would you explain Trampolene to them and why should they listen to Swansea To Hornsey?

Life is short, experience everything you can. Trampolene are like a cheeseburger, without the cheese or the meat - small, quick and tasty but will leave you wanting more.

Swansea To Hornsey is released on October 27 can be ordered via their Pledge Music page.