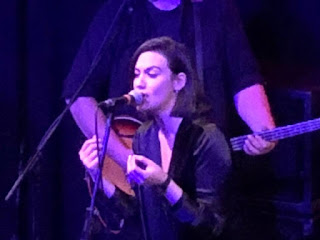 Nadine Shah's third album Holiday Destination is a highly charged album whose main theme is the immigration crises around the world and society's reaction to them. Performing the whole of the album plus selected cuts from her first two to a packed sold-out Band On The Wall, her passionate commitment to defend those that can't help themselves and to make sure the issue stays on the page shone through like a beacon.

Holiday Destination tackles the theme of immigration and migrants head on. As a second generation immigrant of Pakistani father and Norwegian mother and with a broad Geordie accent to boot, Nadine is a shining example of what immigration can offer to the UK culturally, but also from the way she talks about humanising the dehumanised and realising just how lucky we are by accident of birth to live here and not in Sudan, Eritrea, Afghanistan or Syria. She does this without preaching, although we are the converted, but by taking the subject back to the fact that we're all human beings, referencing a documentary called A Syrian Love Story in the introduction to final track Mother Fighter, but also Jo Cox who died as a result of her beliefs.

The songs, despite their subject matter, are not dark, depressing and foreboding though, the six-piece band bring them to shining life and it's this contrast that adds further to the impact they have. You watch Nadine looking at her audience, steel in her eyes, but also a spring in her step as she moves from side to side, holding people's gaze as she delivers her message, whether it be the condemnation of those worrying about their holidays and whether their hotel will be affected while other humans suffer on the album's title track or the dissection of the world's events in 2016. 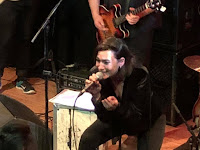 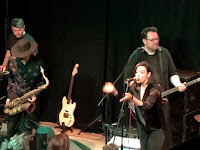 She's on good form too between songs, a million miles away from the shy retiring performer we witnessed back in 2013 when she released her debut album Love Your Dumb and Mad. She quips "I grew it myself" to a polite heckler who compliments her on her hair, she jokes with someone who offers her a room when she's telling us how much she loves Manchester and asks if we know anyone who can help her buy somewhere and she tells us that she's planning on recording an album of sea shanties to consolidate the fact that Jolly Sailor made number 1 on the Lithuanian iTunes charts. Fool is dedicated to "an arsehole who's not here tonight", a reference to an old boyfriend from here.

And then there's her voice, always her most potent weapon with the ability to emote the sentiments of the words in her songs and ensure the audience have no hiding place from the message. Her band manage to both create the intimate tension of the quieter moments of the songs and to let loose when the songs call for it, including glorious sax that duels with the rest of the guitars, drums and keyboards when brought into the mix.

Holiday Destination does what no other album released this year has done. It's taken one major political and social issue of our time and created a narrative that those who believe in it can relate to and which speaks for them. Outside these walls that message might not be one that's universally agreed with, but as Nadine says before Mother Fighter, it's one that we have to keep talking about and changing people's views. The world's moved on from our politically charged musicians arming themselves with just an acoustic guitar and words and this is how it needs to be done in these troubling times where intolerance and selfishness rule the roost and empathy is at a premium.