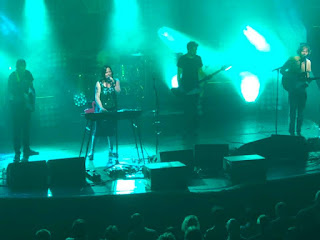 Twenty four years since they last graced a Manchester stage, Slowdive make a long-awaited return, armed with their self-titled and strongest yet comeback album and playing their biggest headline show in the city in the revered setting of the Albert Hall.

The venue is made for Slowdive. The imposing backdrop, lit by a bank of lights and strobes that could power a small country, is perfect for their imperious control of speed and volume of their songs, the way they transform the sweetest of melodies into a ear shattering wall of sound at the flick of a virtual switch. Add to this the clever way they use Rachel’s sugar sweet and Neil’s harsher tones to create contrast between and often in the same song and you start to understand why Slowdive, particularly in this live environment, are such a compelling proposition.

What Slowdive have also achieved is to come back with an album that doesn’t just match their 1990s output, but exceeds it. It’s part of the reason for their new-found popularity as songs like the set opener Slomo, Star Roving, the ecstatic Sugar For The Pill and encore No Longer Making Time from this year’s self-titled record get a reception at least as strong as their older material. If there’s one disappointment of the evening it’s that there’s not more from it.

Now they also feel freed from the weight of expectation that came with being typecast in the shoegaze movement that coincided with their first EPs and debut album Just For A Day and having their career trajectory determined by a press that was fixated on putting bands in boxes and leaving them there when their interest moved on. It’s telling that second album Souvlaki is the most represented here as it was the time the band freed themselves from being endlessly compared and broke on their own. The songs sound like the band have fallen in love with them all other again, particularly the combination of When The Sun Hits and Alison towards the end of their set where the stunning light show is etched up a notch and they lose themselves and us in a glorious cacophony of guitars and a thrilling contrast between Rachel and Neil’s vocals. They then leave us ears ringing at the end of the main set with a cover of Syd Barrett’s Golden Hair.

Slowdive always felt something like outsiders, on the edge of a movement that got spat out by the faddy press of their time and downsizing in size as time went on. Time has though served them well and from one of the least likely, their return has become one of the most successful, treading new ground rather than simply revisiting old and benefitting from the distance that years bring with them. They don’t say much, other than for Rachel to periodically thank us, but there’s no need as their music does the talking for them.

Slowdive played Slomo, Slowdive, Catch The Breeze, Crazy For You, Star Roving, Souvlaki Space Station, Avalyn, Don’t Know Why, Blue Skied An’ Clear, When The Sun Hits, Alison, Sugar For The Pill and Golden Hair with an encore of No Longer Making Time, Dagger and 40 Days.

Email ThisBlogThis!Share to TwitterShare to FacebookShare to Pinterest
Labels: Slowdive