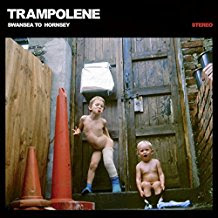 It's been a long wait for Swansea To Hornsey as Trampolene have bided their time until the moment was right to release an album, satisfying their growing fan base with a series of weird, wonderful and varied EPs and we're delighted to say that diversity is also present and correct on their debut album.

What's so brilliant about Trampolene, like few if any other bands, is the way that they jump from a big blow you away rock song to the softest most tender streetwise ballad to a poem that's dripping in social commentary. They do it all without losing continuity and it allows them to stretch the record to fourteen songs, something that's often frowned on these days.

The album is a mix of the old and new, songs chosen from their set of EPs by fans for the record and then new ones that they've been playing during their seemingly endless touring this year. That in itself is testament to the relationship they've built up, one that's based on both love and trust and is very evident when you go and watch them live as well.

Some of those older songs have stood the test of time. Imagine Something Yesterday was one of their earliest singles and still possesses all that gobby cocksure arrogance you get from all the best new bands around - "there's nothing that I want to listen on all the playlists that I'm flicking through" - a self-belief that what they're doing is the best thing in the world. Alcohol Kiss is a sub-three-minute head rush of a song about the excitement of drunken lust and the consequences of it "give me your lips, kill me with your alcohol kiss" whilst Dreams So Rich, Life So Poor muses on the gap between what you want to do and what you can afford to do, talking of the issue of zero contracts and the need to have money to open doors of opportunity and to have fun - "without my flagon of cider, it's hard to get fucked on a fiver."

Another early single You Do Nothing For Me still carries that ferocious punk spirit that they burst onto the scene with, a controlled anger and disdain for the song's subject "you are a paper chaser when you want to be a shaker maker." Primrose Hill (5th September) starts with the sort of big guitar riffs you'd expect to find in the middle of a Muse album, but when placed in context with the lyrics which reflect that "you and me are just the same" it's pulled off through its pure audacity and the fact that Trampolene's influences and styles across the whole record are like rummaging at a jumble sale and striking pure gold.

Latest single The Boy That Life Forgot jumps from quiet contemplative verses to a chorus that jumps in out of nowhere and drops back down equally as quickly. It's another example of where Jack's lyrics resonate, they're non-specific enough for anyone to be able to relate it to their own situation, something that's a dying art in songwriting these days - an example being the line "please insert your meaningless life into the chip and pin device." The album's penultimate track Storm Heaven clocks in at close to eight minutes and sees the boys let loose with their guitars and live out their rock star fantasies without ever falling into cliche.

It's not all about loud rock and roll head rush though. Recent single The Gangway muses romantically with an air of realism that "growing up true is hard to do" as a reflection on the pressures on young people today. It's immediately relatable to as there's no clever lyrical double meanings, just genuine from the heart and soul pondering on the cards that have been dealt and concludes "it adds up to zero when you're not around." Beautiful Pain similarly hits the mark with its observations about the batterings and bruises of love - "why do I pick my body up off the floor when giving in is the only cure", whilst Already Older Than I Dreamed I'd Be is a late night musing on life and love for its first two minutes fifteen before the last minute head rush of guitars. The acoustic strum of Blue Balls And A Broken Heart is similarly a laying bare of the rawest most true of emotions in a voice that's on the brink of cracking under the strain.

The three poems that are included are the best known of Jack's repertoire. The album opens with Artwork Of Youth, a tale of reflection of characters that Jack met during his schooldays, who gave him his first experiences of everything from blow jobs to punching people in the face and smashing his head open, cumulating in his triumphant kiss off "but I was the first to get out, thank fuck for that" which feels like the start of the journey of the album's title. Ketamine is more controversial, an assessment of the pro and cons of taking it as a drug, not celebrating it, but neither condemning it, finishing with the fact that it could kill you. The final poem Poundland is possibly their best known one and a fitting way to finish it off, a paean to the shop where you have to "swallow your pride and step inside" where "everything's a pound love, it's Poundland."

Swansea To Hornsey manages the neat, and often difficult, balancing act on the debut album of a band as prolific and diverse as Trampolene. All the strands of a band that's creative juices and subject matters run wide and deep are covered and then some more. It'd be impossible to capture the raw dynamic energy of their live shows and channel Jack's charismatic presence, but they come as close as you can to doing so. It's an impressive document of one of the most engaging and underappreciated (so far) bands around.

Swansea To Hornsey is released on October 27 can be ordered via their Pledge Music page.