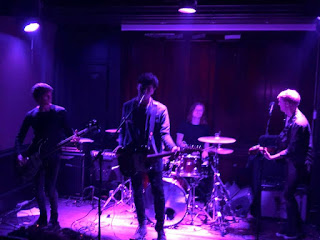 To celebrate the release of new single Mania, Jekyll headlined The Castle Hotel on Saturday night with a seven-song set brimming with sonic ambition more suited to much bigger rooms.

Jekyll have been around for a few years now and it’s been fascinating to watch them develop from a bunch of kids playing everything as loudly as they could into what they are today. Right from the start of The Wounds We’ve Ignored it’s clear that they’re a band wanting to push the boundaries of what they do. Their songs are painted on big imposing canvasses whose walls are only defined by the physical space in which they’re being performed. Pick these songs up and drop them in somewhere like the Ritz and you’d give them the space to expand and stretch out.

That’s not where they are yet though so the likes of I Do What I Can and Unspoken are left to try and blow out the windows here. Jekyll’s songs soar out of nowhere, stop and then crash back into life like the most powerful wave as the four of them, almost intuitively at one in union, let loose. Joel’s now an imposing frontman and band leader, confident of voice and assured in the way he, like his bandmates Mike, Lewis and Liam, immerse themselves in their performance.

Mania is their strongest release to date, a powerful statement of intent, although the likes of Wounds and Cramp now feel a million miles further on than when they came out. It’s dropped as the penultimate song before a tumultuous So Wrong brings the set to its conclusion. It’s a shame that Neighbourhood Festival across town probably took a chunk of their audience but Jekyll wouldn’t have been out of place on that bill.

Jekyll played The Wounds We've Ignored, Cramp, I Do What I Can, Unspoken, Othello, Mania and So Wrong

Read our recent interview with them here.

Email ThisBlogThis!Share to TwitterShare to FacebookShare to Pinterest
Labels: Jekyll