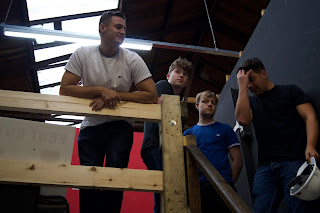 Urban Theory are new kids on the block, less than eighteen months into their existence as a band, but already creating waves around Manchester with their direct no-nonsense live shows and a couple of singles under their belt which confirmed the positive first impressions of their gigs. This weekend, they play their biggest show to date at Gorilla with Ist Ist and Control Of The Going. We caught up with them for a chat about how they came together, plans for the future and the excitement around Saturday's show.

Could you introduce Urban Theory please and tell us a little bit about how you got together?

Urban Theory are a band that have been going now properly in Manchester for just under 1 ½ yrs, we are a four-piece Indie/Punk Band based between Bury and Whitefield. We are heavily inspired by a vast range of genres however our sound, mostly comes from Post-Punk Reveal/indie and Madchester etc, through bands like Buzzcocks, The Libertines, The Strokes, The Stone Roses and Arctic Monkeys.

However, our influences do not stop there, there are too many influences each member could talk about as we come from different backgrounds in music.

The current line-up was formed in the summer of 2016, consisting of members Alexander Quinn on Lead Vocals/Rhythm Guitar, James ‘Jimbo’ Chapman on Backing Vocals/Bass Guitar, Ellis Willoughby on Drums/ Backing vocals and Jake Heath on Backing Vocals/Lead Guitar and each of us have individual drives, influences and dynamics that combine to create our sound.

The band formed through me (Alex) as I started off jamming and playing a few gigs with a load of covers. Eventually I met James through friends of a friend, who then became the bassist of the band. After this we had a few members who left, then gained Ellis through people we knew and his reputation, so he became the drummer. Shortly after Jake joined, the lead guitarist who I met funnily enough through my driving instructor, which was pretty mad.

To be honest the name came to my head one night so I typed it in google and the definition was something that related to what we write about which is social issues. In addition, we thought the name went pretty well together so yeah that’s us!

Do you write songs together as a band or do you have one main songwriter?

A bit of both to be honest, most lyrics are done individually which are then brought to practice. However most of the songs musically come from mostly jamming as a band before we rehearse or we just take whole rehearsals and jam.

Tell us a little about your recent single Weekend Offender.  What was the inspiration for it and the video?

Weekend Offender was written due to the localised attitude of football and the culture which surrounds it, the song also links to young adolescent situations which occur on a typical Saturday. For the video, it isn’t much special or fancy however the image illustrates our local football team's stadium Bury, which the song is targeted at.

You're playing Gorilla with Ist Ist and Control Of The Going on October 14, your biggest show so far.  Are you excited / nervous about playing such a well-known established venue?

To be honest we are more excited than nervous, this is because this is what we have always wanted to do these kind of events, playing in front of great crowds and playing with top bands. Nerves may turn up on the night but the adrenaline will overcome the nerves.

You've released a couple of singles to date. What are your plans for future releases - can we expect something new for the Gorilla show?

We have a few new songs that haven’t been played yet in Manchester, a couple of old ones we have brought back that have been revamped, so yeah it should be good. We have plans to release a few songs possibly near the end of the year, but for now we want to carry on getting the songs we have already recorded out there to people who haven’t heard of us.

Finally, if you had to describe Urban Theory to an unsuspecting punter, where would you start?

Full of energy, tight, rowdy, but lads who are humble wanting to play music that’s it really.