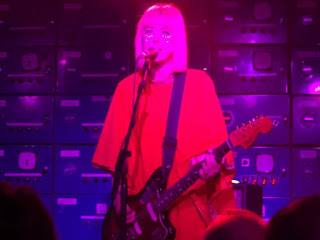 The Lovely Eggs are out on the road ahead of the release of their fifth album early next year and on Friday night called into Manchester Gorilla, the biggest date on the tour and full to the rafters, for a raucous run through of some of the best moments from their spiky back catalogue in front of an up-for-it crowd. Support came from Wrexham's rather excellent Seazoo.

We knew absolutely nothing about Seazoo coming into the venue but left clutching a copy of their Jumbo EP and awaiting their album that's coming out in the not too distant future. Hailing from the underground scene that seems to be blossoming over in Wrexham (see also Baby Blue), their influences are clear but they never merely imitate them. Driven along by synths and rolling rumbling guitars, they echo some of the very best grunge garage pop of the nineties, but give it a warm modern twist. Songs like Skulls, Dog Hotel and singles Shoreline and Roy's World draw you in and take you with them on the ride on the crest of a wave. 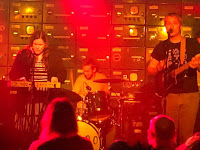 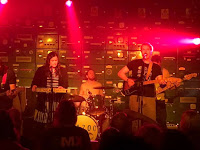 The Lovely Eggs are on fire tonight, worried by the fact that we've all just clocked out of work and it's only nine o'clock when they come on stage and we might not be pissed enough, but determined to make us have a party. And with songs like People Are Twats, Dickhead and Fuck It, you can rest assured it's going to be an absolute blast. There's no airs or graces with Holly and David just the coming together of guitars and drums and their slightly off-the-wall gruff Lancaster humour that makes them such a joy to watch. At times Holly amuses herself so much she can hardly continue, at others she catches the eye of the audience engrossed in singing back the latest expletive and smiles. All this might make you think they're some sort of novelty act, but that couldn't be further from the truth, they make a serious noise that gets an initially reticent Manchester crowd bouncing around by the end. 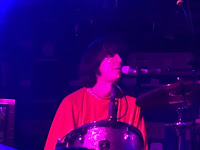 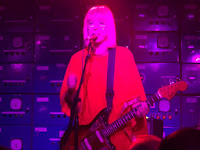 The set covers most bases of their four albums and multitude of singles to date within the thirteen song set. Highlights include a raucous Magic Onion and a glorious stop-start People Are Twats, with the drums crashing around us whenever we get to the tongue-in-cheek punch line and where Holly stops to commend us for introducing an eighth day into the week just to continue the song. You sense the camaraderie between the band and their crowd, they invite one on stage to film Fuck It and when they just dance, Holly tells them off and gets someone else up and she points at pockets of us to tell us that last time they were here that we were trouble. The Gorilla moshpit stops and becomes a sea of arms waving scarves and singing along. It might look like a very strange moment, but it's a beautiful expression of being an outsider, not giving a shit and being yourself.

An hour goes by in the blink of an eye, as we're stuck with a 10pm curfew, but as they deliver power  surges like Wiggy Giggy and Allergies and finish with a battered and bruised Return To Witchcraft (no fake encores allowed here), we're left breathless and exhilarated by one of the most genuine and unpretentious bands around.

You Tube video by Hector Kiki.

Email ThisBlogThis!Share to TwitterShare to FacebookShare to Pinterest
Labels: Seazoo, The Lovely Eggs