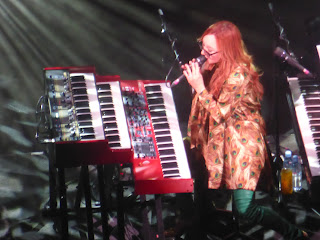 Tori Amos's first Manchester show for three and a half years took in the fading splendour of The Palace Theatre with Bell X1 in support. With a new album Native Invader out and her insistence on switching around the setlist each and every night incorporating fan requests into the evening, a packed expectant crowd waited for one of the most engaging and intriguing artists in the world to entertain them.

It's a surprise to see Bell X1 opening up the evening as they'd slipped off our radar, having regularly been on our gig lists a decade or so ago. The three-piece start with a song from that era, Bad Skin Day from their breakthrough album (in the UK) Flock. They've not lost any of their ability to craft beautifully emotive songs that the listener can immediately feel an emotional attachment to.

As they move through more recent songs - Careful What You Wish For and the set-closing The End Is Nigh off 2013's Chop Chop, Velcro and Built To Last off 2011's Bloodless Coup, Take Your Sweet Time off last year's Arms - that becomes evident as their stripped-down to basics set is given the respect it deserves by an attentive yet impatient Tori Amos audience and the queue for CDs at the end tells it own story in that respect. What's still there, more than a decade on, is a depth and warmth to what they do both in the songwriting craft and the delivery. 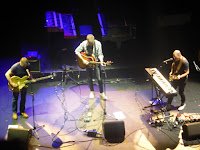 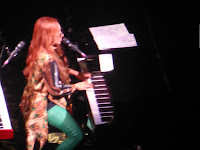 Tori comes onto stage fifteen minutes late and the roar is deafening, a mix of high-pitched outpourings of emotion for an artist who clearly means the absolute everything to those around us and the start of shouts for a particular personal favourite to be added to the setlist. In one of many shows of humour that such celebrated artists often lose the ability to demonstrate, she hides her handwritten setlist from view of prying eyes with zoom lenses. That humility and clear joy of playing to us and being in Manchester shines throughout the set - whether it being allowing herself to be interrupted by slightly over excited fans and then commending them for their Mancunian enthusiasm and incorporating the particularly prescient Oasis anthem Don't Look Back In Anger into the end of Upside Down 2.

The set is, as you'd expect with someone with her reputation of chopping and changing to match her mood and the requests her audience have submitted in advance, even name checking a Jenny Lennon at one point, a real mix of songs from across her career. She finishes with a section of Cornflake Girl, the song that really cemented her in the hearts of millions twenty five years ago, but precedes it with Cloud Riders from her new Native Invaders album, from which she also plays Reindeer King. The magic of not knowing exactly what's she going to play next simply heightens the response of the audience as once the first bars of each song are recognised, there's an excited shriek from somewhere around us.

She plays solo, spinning round 180 degrees from keyboard to piano mid-song without missing a note, tapping her feet to keep her time. She could look lost on the huge stage, sat there on a raised section in the middle, but it's the way that she delivers these songs with an intensity that never once drops that means she absolutely fills the cavernous spaces of the theatre. Her voice is as show-stoppingly powerful as ever, whether it be the fragility she displays in the emotional laying bare feelings of Mother or the exuberance of Cornflake Girl which has most of the crowd on their feet or the mischievousness of Pirates.

This is the first time we've seen Tori Amos live, but like those around us for whom this is some form of semi-religious pilgrimage, we're drawn in and disarmed by the way she makes the whole thing seem so effortless, so natural and unscripted despite the lack of anywhere for her to hide or anyone else to rely on. It's just one woman and her keys and voice in a huge hall, but for the just short of two hours she's on stage, she has everyone's ears and eyes fixed on her.