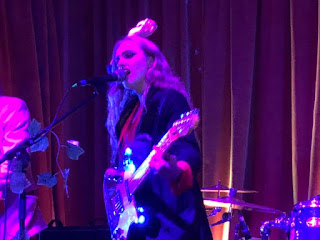 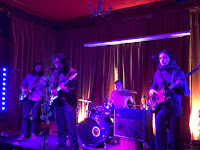 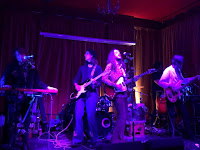 Sunday night saw A Night Of Total Psych at Gullivers, a seven act line-up headlined by Maddy Storm. We caught her headline set as well as those by Liverpool's DUSST and Birmingham's The Mothers Earth Experiment.

The Mothers Earth Experiment are a band that probably come close than most of the bands that huddle under the psych umbrella. Their songs flow like mad epic trips, one minute led by guitars, the next with keyboards taking the reigns and leading the dance. Half of them are covered in face paint, which they never explain why, and it's hard to take your eyes off front man Mark as he immerses himself in the songs and is lost in his own world. The songs themselves skip from genre to genre, from delicate moments such as one of their oldest songs Fortress to the controlled chaos of their closing song Cool Down Mama. We'd never heard of them before they played, we left with their CD, that's the best recommendation you can get for a band. 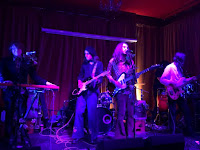 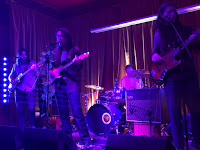 DUSST are a band that we've seen on numerous occasions now and they've always impressed us with their laid back style and approach. Tonight they struggle a little with guitar tuning between songs and that gives some of the audience the opportunity they need to start conversations they continue over them. This is a real shame because they have songs like Happiness On The Horizon that really make them stand out, as they fuse various different strands into something that's genuinely easy to listen to and immerse yourself in without being throwaway. This warmth, the quality of their songwriting and the intuitive groove that they create means they emerge the other end, but it's a close thing.

It's hard watching Maddy Storm perform to remind yourself that she's only two singles into her career. Backed by Sam on keyboards, Jack on guitars and Tom on drums, it's an impressive performance that screams star quality right from the start - composed, dramatic and totally immersed in her songs. With a couple of new (to us) songs as well as her next single Silver Lining (due next month) starting the set, they test the Gullivers sound system to its max without losing the innate inherent beauty of the songs and, of course, Maddy's exquisite voice. 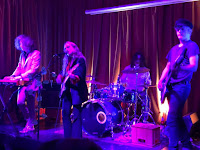 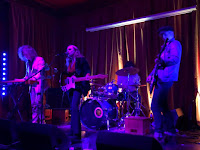 The second half of the set is more familiar, the intensity of Water is matched by her first two singles, Tempest and To The Sun, each one a story, a play being set to music in their own right, with Maddy as the story teller, not just in voice, but in performance. That's not to underplay the band's contribution as they've got a formidable presence attuned perfectly to these songs, but there's only one centre of attention tonight.

The Mothers Earth Experiment can be found on Facebook.