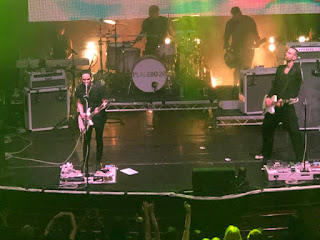 Placebo’s 20th anniversary tour rolled into Manchester on Wednesday night for an intimate hastily-arranged show at the Albert Hall, a replacement for Blackpool Empress Ballroom that is undergoing repairs. Making a stance on the use of mobile phones and cameras and running through a career spanning set, Placebo celebrated their birthday in style.

Before the band enter there’s a video showing of Every You Every Me, an unusual move before what was billed as a celebration of their 20 years to play one of their most enduring songs. Recent press has though told us that Placebo aren’t particularly enamoured with their first two albums and the songs they’re playing from them might not get heard again for a long time and therefore the absence of the likes of Come Home, Teenage Angst, Bruise Pristine and You Don’t Care About Us comes as no real surprise.

Fortunately Placebo have a lifetime of songs to make up for that slight disappointment, one of those bands that you don’t actually realise how many until they’re laid out in front of you. They start with Pure Morning, coming on stage one by one as that riff starts proceedings followed by drums and then Brian enters last. You get his issues with the lyrics when compared to later work, but it’s impossible to deny the simple powerful impact of them. Once the crowd’s applause dies down, and there’s points tonight the band have to wait until it does before starting the next song, Brian tells us that Manchester was the first, and last, place they ever had a guitar stolen. They zoom forward to their last album Loud Like Love’s title track and the response is no less delirious.

Brian then addresses us, talking about the exclusivity of the party we’re at and tells us there’s parameters, a euphemism for rules, and that means no phones or cameras and that people will be asked to leave who don’t comply because they want our full attention. To make his point he stops Jesus’ Son twice to point out audience members who don’t comply and tells us it’s going to be a long evening. It works, we applaud the sentiment, but it was close to being a little too much as security patrol the balcony looking for offenders. The song, a limited release last year as a precursor to the A Place For Us To Dream retrospective, is an indicator that there’s still fire in the belly, albeit more direct and specifically targeted, twenty years on.

The set then takes us on a journey through their seven albums, with two or three tracks from each one of them so the likes of Special Needs and The Bitter End from Sleeping With Ghosts rub shoulders with Exit Wounds and Too Many Friends off Loud Like Love. The likes of Special K, Song To Say Goodbye and Devil In The Details show us that whilst Placebo have developed as a band, there’s still a genuine continuity to their sound, expanded tonight to a six piece. They pay a poignant tribute to Brian’s mentor David Bowie, a huge influence on their career and supporter of the band, with a montage during Without You I’m Nothing.

There’s two encores, the first opening with Nancy Boy as Stefan triumphantly displays a rainbow guitar, held aloft as the song kicks into life. The crowd go predictably wild at this point and continue to do so as they launch into Infra Red. They depart and return a second time for their cover of Kate Bush’s Running Up That Hill, which works the only way it can by transforming it into a Placebo song.

At the end it takes Brian a long time to leave, thanking every corner of the hall and breathing in the adulation of the two thousand crowd. Whether this is a comma or a full stop for Placebo, it’s a timely recall and reminder of their significant contribution to alternative rock music over the past two decades.

Email ThisBlogThis!Share to TwitterShare to FacebookShare to Pinterest
Labels: Placebo