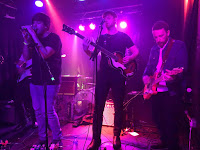 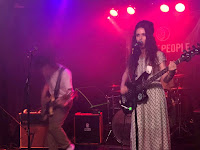 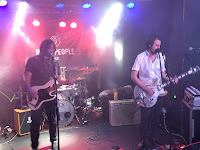 The Friday night of Sonderfest saw bands spread out across venues in the Oxford Road area of Manchester. We went along to Night People for late sets from Hey Bulldog, The Cosmics and a valedictory performance from Control Of The Going.

It's already nearly midnight by the time Hey Bulldog take to the stage and some of the crowd are already worse for wear, but their focus is drawn to the stage as the trio pound through a storming seven-song set. Opening with Death And Greed, it's immediately obvious how regular gigging has taught them that they don't just need to be exceptional musicians, but they need to open that out to the audience and that's something they've now done, even in their more reflective moments like the haunting parts of No Future Part II. 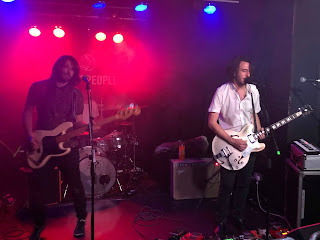 Hey Bulldog pull no punches when they let loose, they're a traditional rock and roll band in many senses but they're also full of ideas on how to stretch these songs and paint their own masterpieces. Al Lupo, their last single, feels like it's got new ideas injected into it every time they play it, whether it be them constantly revisiting songs or allowing themselves to improvise around the song's core structures. There's an infectiousness to them that gets the feet moving whilst recognising their mastery of their art and their intuitive infusion of traditional rock and roll moves into something that's uniquely them.

We'd heard rave reports of The Cosmics from their recent set at Psych Fest in Manchester and weren't disappointed by what we heard. The three piece have a wonderful edge and energy to them that's more than just youthful abandon. They've also got their own fanbase out in numbers a hundred or so miles away from home and Erin, Danny and Conor really make a connection both with them and the older crowd that are waiting to be impressed by the young kids on the block as they merge punk influences with songs that also have pop stylings running through them without ever losing a real centrifugal force to them. 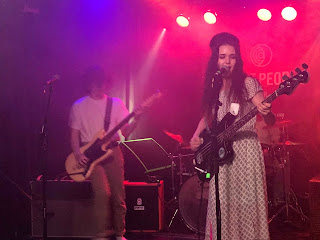 Forthcoming single Trust Is Blind is a highlight of the set and certain to set more pulses racing when it's released in November. It's a slow builder compared to some of their more urgent immediate tracks, but it showcases the impressive variety they've got for a three-piece so early in their career. Eyes and I Quit possess that same immediacy that will serve them well as their chosen weapon of attack as their audience grows and grows in the coming months.

It's a very weird atmosphere as the clock strikes half past one and Control Of The Going bring down the curtain on this phase of the band as they play their last gig for a very long time and their last with this line-up. Ideally you'd want a huge farewell show, packed with friends, family and fans and a celebration, rather than this early morning headline slot at a festival to a hardcore few who've drunk their way past their bedtime. As a result it's a slightly surreal experience, particularly when there's an argument between the sound engineer and one of their crew about sound issues near the end of the set.

They play most of their album I Love You But It's Going To Rain, including inviting, in the collaborative spirit of the band, Rob from Hey Bulldog on to the stage for their co-write The Family and later on Rob and Matt as they finish with a new song Day To Day which they released as a farewell to this phase on Astral Elevator's recent compilation. 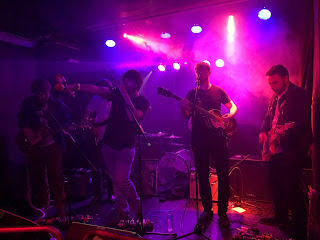 Those that have stayed around though appreciate what Control Of The Going had going for them. They somehow managed to incorporate the sound of six people and their influences and those of the scene they were born in into their sound and try to stretch the boundaries of that. Songs like Love You More and Star are not of this city, not tied in by the often suffocating legacy of the city's musical past, and this wonderful basement club could be anywhere in the world if it were not for the attitude they bring with them. It was a strange farewell but then Control Of The Going have never really done things the way they should.

Control Of The Going are on Facebook, Twitter and Soundcloud. Read our interview with them about the album I Love You But It's Going To Rain here. Our review of the album can be found here and Liam's story about the recording of it here. The album is released digitally and on vinyl and can be ordered from their Bandcamp.

Email ThisBlogThis!Share to TwitterShare to FacebookShare to Pinterest
Labels: Control Of The Going, Hey Bulldog, The Cosmics