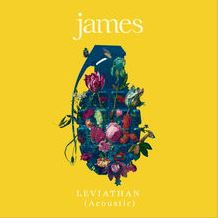 James have released a second acoustic track from their recent top ten album Living In Extraordinary Times. Fan favourite Leviathan has been stripped down and reworked with backing vocals from Deborah Knox-Hewson who joined the band for a few months earlier this year.

An obvious single from the album, were it not for the expletive "fucking love, fucking and love, before they drop the bomb, make sure you get enough" the song quickly became a live favourite and was performed on acoustic sessions with the "fucking" replaced by "tainted" as a means of ensuring it could be played.

The acoustic version of the single is available to buy on iTunes.