The Tom Hingley Band - I Love My Job 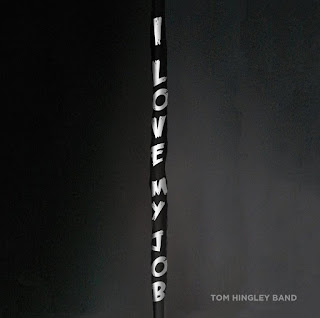 A prolific singer, songwriter, acoustic troubadour and leader of his own tribute band, Tom Hingley returns to his roots as front man in an exciting new project – The Tom Hingley Band – ably supported by Malc Law on drums and Ste Pearce on bass, with Tom on vocals and guitar. Stuart Ralston has a listen and will be raving about it for quite some time.

Tom Hingley's post Inspirals output has been wide, varied, adored, and sometimes sadly overlooked. Some of his solo work (see, for example the Sand, Paper & Thames Valley Delta Blues albums) ranks as his best in a career spanning nearly four decades. Since he disbanded his excellent The Lovers band, Tom has concentrated on solo work and his burgeoning Inspirals tribute band goes from strength. Somewhere in between though, Tom has established an exciting new blues, punk influenced trio The Tom Hingley Band. Forming some four years ago, we were suitably impressed when they began road testing songs for this album back in 2014. The chemistry between the three was evident to see and live, they intuitively played off each other, creating a new sound not typically associated with Tom's other output.

Some of the songs on I Love My Job appeared on the 2016 Record Store Day release. With those excellent songs now re-recorded, I Love My Job is a classic collection of tunes, raging from the punk of tracks like Bullet to the orchestral splendour of Beautiful Girl.

Opening with the chiming bells of a church clock, it heralds a new beginning for Hingley before Black Light kicks in with a sharp pounding bass from Ste Pearce and an angst ridden vocal from Tom. A suitably impressive opening before the contemplative Glory Days - “they were the best years of my life... I didn't have a clue... wish we could go back there again” sings Hingley in what is his most open and upfront lyrics yet reflecting on his past experiences of the early 90s.

Toy is one of those tunes Tom has had kicking about for a few years now. Sounding great as part of his acoustic set, it sounds suitably impressive as a piece of three and a half minute power pop too. Bullet is even more impressive. It has balls and swagger. Pearce and Law are a formidable rhythm section as is highlighted on Bullet, with Tom singing a simplistic, almost hypnotic chorus. One of the stand out tracks.

The pace is altered somewhat with the majestic Beautiful Girl, with Tom singing about his daughter.  It's his most emotive vocal too since Leaving It All Behind on his 2013 solo album Sand. Beggar's Hand was the track that most impressed us when The Tom Hingley Band first emerged. First emerging as the lead track on the Record Store Day 7” single, it perhaps best showcases how good this trio of musicians are. Delivered at a fast pace, with all three of them trying to outdo and compliment each other in equal measures. Tom's euphoric, uplifting vocals shine. Prodigal Son sees the band slow things down a little but still sparkles with some delightful string arrangements to augment it.

Nasty People is perhaps the closest Tom gets to the sounds he created with The Lovers, whilst White Sheep is another departure. Clocking in at over five minutes, this bluesy jam captures the sound Tom often strives for in his solo shows. Shining For Somebody Else ends proceedings and is again a little looser and laid back than earlier offerings.

In I Love My Job Tom, Malc and Ste have delivered an album that we always knew they had in them. There are many styles visited here and this is an outstanding debut. We hope to see them deliver more of the same both live and in the studio.