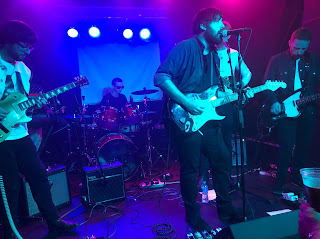 As the current phase of the ever-changing collective that is Control Of The Going comes to an end, they played their last non-festival set at Night People on Saturday night.

They kick into a fearsome groove from the off with Family, in our view, the stand out track from their recent album I Love But It’s Going To Rain. It’s a celebration of the musical community that they’ve become an integral part of, either as performers or fans of other bands. Powered by a melodic driving beat that takes no prisoners, its uplifting spirit puts clear water between them and many other bands in the city that have the psyche label loosely attached around their necks as a means of identification. 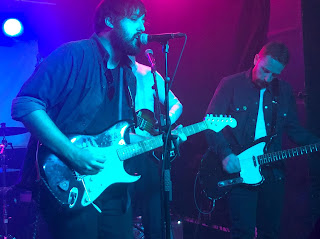 That spirit courses through the rest of the set, all taken from the album except for Day By Day from the forthcoming Astral Elevator compilation. Close your eyes and you’re transported to a road trip through the deserts of the South West states of the US as Control Of The Going’s driving influences hail from lands far afield from the cloying rainy miserablism of Manchester whatever their album title might suggest.

They’re at their best when they let loose and let their music drive them and tonight is probably the best we’ve ever seen them, an intuitive connection between them and opening themselves up to the audience, Liam at one point out-eyeballing an over-zealous friend during You’re Mine. War Crime spits and fizzes with verbal retribution and guitars which threaten to suffocate those that don’t lift their heads up for air and the aforementioned Day To Day is possibly their most immediate offering to date. 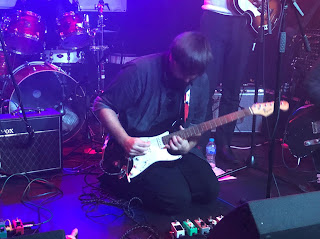 They finish with the glorious duo of Star and an elongated She, the song that thrust them forwards last year. As the six-piece gel perfectly together, with so much going on yet never standing on each other’s toes (musically and physically), there’s a tinge of regret that they won’t be with us in this form for much longer just as they were about to cast off their chrysalis and become something of great beauty.

They played Family, Love You More, Sell Your Soul, War Crime, Clouds, Wild Flower, Day By Day, You're Mine, Star and She.

Read our interview with them about the album I Love You But It's Going To Rain here. Our review of the album can be found here and Liam's story about the recording of it here.

The album is released digitally and on vinyl and can be ordered from their Bandcamp.