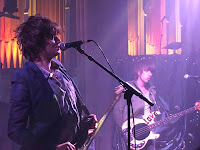 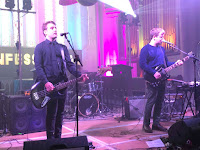 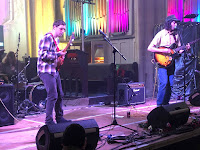 Confessional Festival takes place every year in Blackburn, where a disused church is turned into the perfect indoor festival venue by the folks behind the successful Night At The Museum events. This year's bill included the likes of Trampolene, Ist Ist and Fruit Tones.

Before we talk about the bands, a word about the festival itself. It's a brave move to put on a festival in a town not renowned for its live music scene, but the pews were full from early on, rewarding the risk taken by Pete Eastwood and his team who had worked for months on the concept and converting this stunning disused church into a venue suitable for live music. A full bar, two food stalls, some intriguing stalls and installations, more than adequate toilet provision added to a stunning sound and lighting set up is testament to their commitment to doing things properly. It's a pity that the incompetence of Northern Rail meant we weren't able to fully enjoy the whole day.

The first band we caught were Fruit Tones. The compere, one of the best urban poets that seem to inhabit these events we've witnessed, describes them as more Californian than Mancunian and they definitely have a love for the West Coast of America in their tuneful, melody-laden forty minute set. Tracks like Hot Dog Jive, Wet Wet Wet Wet (and they insist on four Wets being wetter than Wet Wet Wet), Love Comes and Jaywalking get some of the crowd up and moving whilst the rest watch attentively and with respect, another thing noticeable about the festival and the crowd. 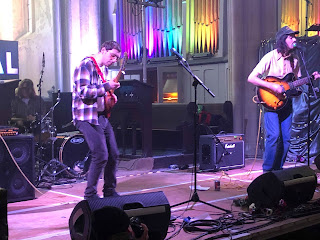 They're a very tight live unit, as you'd expect from a band six years into their existence and the songs are the sort that you feel you've known a long time even before you've finished hearing them for the first, yet that familiarity is due to the way they focus on the simple things like the tune and a chorus that sticks in your head rather than apeing someone else. As they finish with a cheery song called Pop My Clogs, they get a great reception from the crowd and deservedly so.

Ist Ist seem to have a thing about churches. Their last show at St Philips in Salford was a sold-out triumph and tonight they're taking on a new audience in a town they haven't played before, but by the end they've won over a whole new army of admirers. They're a million miles away from the scrappy, punchy (in all meanings of those words) band that burst out onto the scene three years ago, and they've replaced that headrush of excitement with something far deeper, engrossing and longer lasting. They're forging their own path, without much industry and press support, and are about at the point where neither will actually be able to ignore them for much longer. 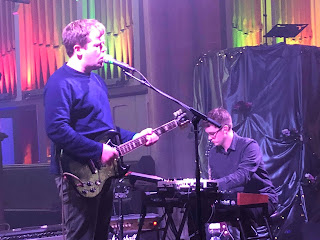 Rather than churning out the same set every show for twelve months like some lesser bands, they're constantly putting new material in front of their audience. With the Spinning Rooms EP only a few months old, their set contains four new songs from its follow-up due later this or early next year. They start with Jennifer's Lips, played for the first time, a song that both sticks to their principles but which also opens up the possibility of them getting mainstream radio play. The other three new songs - Son Is The Father, Exist and I Want To Disappear - feel like a band progressing, exploring the horizons of their sound. The addition of Matt on keyboards and guitar adds more to the likes of Silence, I'm Not Here and the old stalwart Emily. Strangers sounds like the breakthrough single that never was, even more powerful and breathtaking than before.

They finish with Diversion, a mazy song that takes the audience on a journey, stopping dead in the middle before Andy's bass shatters the silence before they let loose for one final time. For a band playing to a crowd that probably knew little about them beforehand, the response at the end is testament to both what they've just delivered and the attention of the audience. It feels like their momentum might just now be unstoppable.

Trampolene seem to be the band on the lips of everyone charged with finding the next big thing, a strange concept given they've been around so long, but they've also been on a journey from being a tempestuous unpredictable rabble that would just play song after song without pausing for breath and lose themselves in what they were doing so much they didn't quite connect. Brilliant nonetheless of course. Trampolene these days are a very different proposition - Jack hasn't lost any of his unpredictability, telling us he has so many sins to tell us about, swigging from a hipflask and shouting "three cheers for Jesus" and warning people getting too close when he wanders out not to kiss him unless they want a chest infection. He tells us the stories behind some of the songs, recites his poem about Ketamine and even adapts Poundland at the end for the fact we're in Blackburn. He has the crowd eating out of the palm of his hand.

What they've also got is an impressive array of songs, both from their debut album Swansea To Hornsea and their just-released double album compilation of EP Pick A Pocket Or Two. It's Not Rock N Roll has evolved into a sprawling epic song, breaking down in the middle to a riff cadged off Seven Nation Army before crashing back in spectacular fashion, aided by a stunning light set up now it's gone dark outside. The energy transmits from stage to the crowd at the front and in the pews and seems to fuel them, Jack having a permanent grin on his face when he's not out amongst us or balancing precariously on the bass amp. 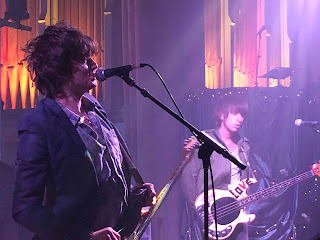 With tracks like You Do Nothing For Me, Alcohol Kiss, Gangway, Beautiful Pain and the premature set-closer Storm Heaven, they've got a set of songs that both get the adrenaline pumping and then soothe you back down. They've got the mastery of the short sharp punch to the throat as tied down as they have the lighter-waving anthems that will not be out of place in the halls they're likely to fill out next year.

And that's sadly our lot. For some bizarre reason Northern Rail have cancelled the rail replacement buses because of a train driver's strike so we have to leave town or be stuck there overnight, sadly missing Ninth Wave and PINS' sets. The trek was more than worth it for the three bands and a festival that puts its attendees and their experience first, a rarity these days in the pursuit of profit.