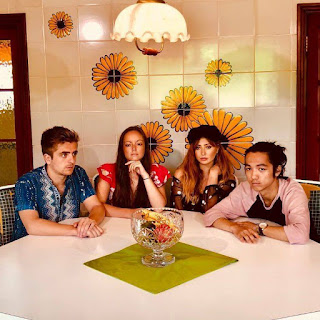 Young Monarch return to Ramsbottom for Head For The Hills festival this Saturday ahead of the release of a new single in October. We caught up with Rebecca for a chat about why they're not your archetypal Manchester band, their exciting plans for the rest of the year and the wide range of influences on their style.

Could you introduce the band and tell us a little about how you got together please?

So our band consists of Rhys Jiang (AKA the majestic God of Hair) on guitar, Chris Rabbitts (AKA the God of Reason) on bass, the in-house monarchal mother Hannah Rose on keys, and myself, Rebecca Lewis (AKA the ginger one) on lead vocals. We all met 4 years ago in Manchester when we joined the RNCM to study music. I’d always written music and really wanted to pursue that in some way or another, so I think during an inspirational moment at a Bill Lawrence concert at Band On The Wall (and admittedly after a few beers) I announced to my friends the great idea of forming a band! We jammed a few songs out in a rehearsal and have been doing it ever since!

Has the fact that you met at the RNCM rather than on a school playing field or in a dark backroom of a pub influenced the way you sound as a band and how you write your songs?

Yeah, I definitely think so! The amazing thing about being at a conservatoire is that you are constantly surrounded by music of all genres and due to the fact that you’re studying, you’re learning new things all the time. Because of this I think the songwriting process has always been the main focus of our band and an area in which we all thrive! It was such an inspirational place in which to house the first few years of Young Monarch, as it gave us the room to constantly learn, improve and adapt into the sound we have today. Our sound has definitely been influenced by the amazing talent of our peers and teachers and I think it will continue to be. It’s an amazing rooting to keep striving for better.

You're very atypical of the sound of a lot of the bands coming out of Manchester at the moment. Do you find that has helped you or hindered you?

Hmmm, I’d like to say in general it has definitely helped us. As you say, we are quite atypical of most of the indie/rock/pop music that is on most bills in Manchetser, so I think it does make us stand out. I remember having a conversation with a good friend of mine who was in awesome band called Lake Komo and he would always talk about your band USP’s.

I’m pretty proud to say we have quite a few, which I think is down to our very broad range of influences. Each one of us listens to quite different styles of music, so we never really talk about wanting to be like one band (apart from Coldplay, but I think that’s a pretty universal goal!) This however was a little bit tricky when we started gigging as no-one really knew who to put us on a bill with, but I think that’s always going to be the case, so we just roll with it!

You've recently been in Jersey filming a couple of videos for future singles.  Why Jersey and could you tell us a little about your future release plans?

So I am actually from Jersey! I lived there all the way up until I was 18 and all my family still live there, so I was really keen to incorporate Jersey into our story. I’m a really strong believer in knowing your roots and being grateful to the people who have helped you along your journey. People like my singing teacher, my best girlfriends and my family are a huge reason why I get to do what I love, so I thought why not involve them! ALSO Jersey is one of the most beautiful places in the world (totally non bias opinion), with some very dramatic backdrops and gorgeous weather, so it seemed like an excellent place to film. We also got asked to play the Main Stage at Jersey Weekender festival along side Rita Ora, Sister Sledge and Sigrid, so it seemed like a good excuse to fit both things in!

We filmed two music videos in Jersey for our next two singles which we’re very excited about! Our first single ‘Strangers’ will be released 5th October followed by ‘Find Me’ shortly after. I think these are our best tracks yet and have got to work with our incredible producer Lael Goldberg (Hurtz) to create something we’re super proud of!

You're playing Head For The Hills Festival in Ramsbottom this weekend. It's given quite a few bands a big boost on the back of their performances there in previous years.  Are you looking forward to going playing to a new audience up there?

YES! And we’re so excited! Giant Rooks played the same slot we are on last year and they’ve only gone from strength to strength including a Manchester sellout at Night & Day Cafe, so we’re super eager to see what happens! We played the opening slot in the tent last year to about 70 people, so we feel very humbled to have been asked back this year on such an awesome slot (a whole 7 hours later to be exact) It feels like we have come a very long way in the past 12 months, so we feel hugely honoured!

You've already played at some amazing places like the Royal Albert Hall and Liverpool Philharmonic. What has been the most special moment for the band so far?

This past 12 months have seen a lot of firsts for us! Our first release, our first music video, first Main Stage at a festival, so it would be hard to pick out just one, but I think 12 year old Rebecca would definitely pick out playing at the Royal Albert Hall, or playing Weekender Festival. I have a personal bucket list of music goals I want to achieve and these 2, including playing on the Graham Norton Show and headlining Glastonbury (obviously) are right at the top! I think all of us were riding high for quite a while after those shows. There’s an incredible feeling you get from playing on big stages which is unlike anything else, and I think our sound really suits venues like those, so I guess it just gives us the drive to get to stage we can headline stages that big!

So we’ll be releasing our next single ‘Strangers’ on October 5th and will be heading out on tour before Christmas, so keep your eyes peeled for tour announcements on our socials! We’ll also be writing and recording and rehearsing for future releases. We have some big plans for the next year, so we’re all super excited!

How would you describe your sound to someone who'd never heard of Young Monarch before?

We’d like to describe our music as emotional alt pop (with a little dash of angsty rock) We make music about the things young people go through, touching on subjects like mental health, relationships and family. Genre wise I’d say we have the poppiness of early Coldplay, ambience of London Grammar, angst of Amber Run (second album) and live vibe of Florence and the Machine, if you can visualise that in your mind haha!