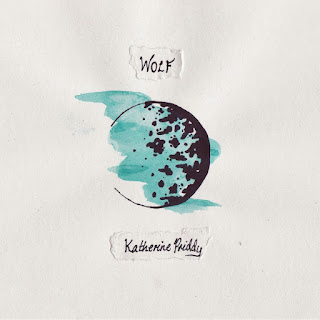 Wolf is the debut EP from Katherine Priddy, four songs from the singer-songwriter that are laced with luscious instrumentation and which showcase a warm revelatory storytelling voice and a free independent spirit.

One look at the long list of instrumentation used on this EP - bass, drums, acoustic and electric guitar, Irish tin whistle, bodhran, violin, viola, cello, accordion, cornet, trombone and bass trombone - before listening to the tracks would give you a very false sense of what to expect from these four songs. The crisp, unfussy production on the EP gives each instrument space to breathe and not to trespass on the others giving it a very understated feel and one that allows Katherine's gorgeous voice to take centre stage.

Whether it be on opening and title track Wolf, where a very subtle drum beat and deep in the background harmonies usher in lyrics of chasing over heath and heather and the lament of why "I love him when his only pleasure is pulling me back down." The song walks through an unpicking of the positives and negative emotions she's going through in her head, until the song hits the middle eight and takes off, gently mind. It's a beautifully restrained opener that sets the tone for the rest of the EP.

Ring Of Roses starts off so fragile and tender, hardly there at all for the first minute other than a gentle guitar and some of the softest vocal harmonies you'll ever here. The first verse is loosely based on the poem of the same name whilst as the song progresses Katherine's voice is layered very cleverly and precisely to create a gentle uplifting feel to it, contrary to the dark plague-ridden subject matter, but one that holds the listener's attention.

Fragile is just that, the music dancing sweetly under Katherine's descriptive picking over the bones of the dying embers of a relationship, thinking of the good times when "forever tasted fresh on our tongues" as lovers ran through fields as dusk fell and laying bare where they've come to with "sitting besides me, but there's a million miles of distance when I look into your eyes."

Nature seems very close to Katherine's thoughts across this EP, and her Facebook profile describes her hometown as English Countryside. That theme pervades into the final song The Old Tree as well, although the sadness that runs through the rest of the four songs is lifted as she sings "the look in your eyes is leading me home." Half way through the song stops and then comes back with soft brass and the chatter of birds in the background and it feels so eerily peaceful as the song and EP finishes with the line "the door's always open and the light's on the stairs" leaving everything open for someone or something to come in and take the story somewhere different.

Wolf is a very tender set of songs that feel like they've been meticulously constructed with an attention to every detail that means you can discover something new with every listen, it's full of little subtle twists in the instrumentation or the layering on her vocals that are designed to accentuate the meaning of the words Katherine is singing. It's impossibly fragile and emotionally open in parts, wistfully reminiscent in others but never lets the listener slip from the spell it casts.