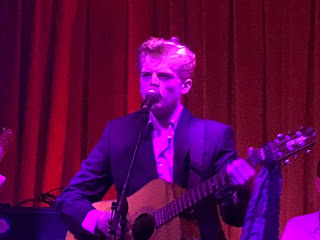 Gullivers was the scene for Jack Oliver Monty's single launch for his debut The Garden and it saw his five-piece band take to the stage with him for the first time in a half-hour set, rich in songwriting craft, emotional intelligence and variety.

For such an unassuming and modest character despite his obvious talent, it's not surprising that Jack's entry is a low-key one despite him entering the stage last after his band mates. By then Chloe has already sung unaccompanied the opening to Nuff Said as the rest of the band take the stage to be followed by Jack, last but not least. Her voice sets the tone for the evening and provides a warm and complementary contrast to Jack when the two of them sing together.

The songs throughout are clearly the mark of someone with a deep knowledge, love and appreciation of music. Songs don't simply live for three minutes and then stop as abruptly as they started. They take you on a journey and Jack has gathered around him a band that share his ethos. A number of times during the course of the set a song would stop dead and then move off into a different direction and headspace, yet somehow remain coherent and a natural continuation, whether it be the apocalyptic optimism of Start The World Again, "the love song to the morning" caused by sleep paralysis of Morning Light, the "health and safety song" Please Don't Run which is nothing of the sort or the uplifting yet also self-deprecating Something More The Man. He finishes the main set with The Garden, a song that perfectly captures the bruised romanticism of so much of what Jack does. 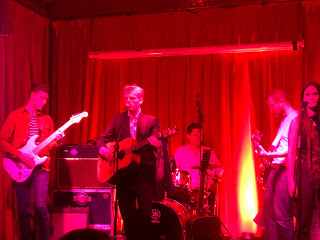 There's a couple of solo tracks interspersed in for balance. Bare To Be The Burden is a very emotional song, deeply personal about mental health and the father / son relationship and it's evident that it's a song that Jack finds hard to sing as he shows his emotions at a couple of places, but it's a brave thing to do to lay so many difficult subjects out in front of people stood on a stage on your own. His encore, after a little bit of encouragement from the crowd is a cover of John Martyn's take on Lonnie Johnson's blues classic Jelly Roll Baker, a brilliantly light-hearted contradiction to what's gone before and an opportunity for him to demonstrate his fingerstyle guitar playing and the first hint of showing off, which the crowd love.

It's an impressive debut outing for the band, technically proficient each of them but with the intuitive chemistry that makes the songs come alive and whilst it's Jack's name on the poster the band flesh out his ideas to deliver those creative visions in his head.