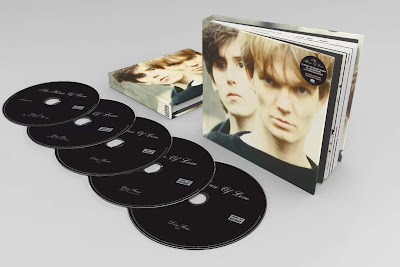 Just before The Stone Roses and Happy Mondays dominated the late 80s, a band from London were the darlings of the scene, John Peel favourites, live favourites and the Creation label's brightest hopes. Their debut album from 1988 receives the reissue treatment - a mightily impressive eighty-five tracks fill five discs in this new 30th Anniversary edition. Stuart Ralston revisits his youth and reports back.

The House of Love were a pivotal band for me growing up. Everyone loved them. Label boss Alan McGee described them as one of the greatest Creation bands, and their front man, Guy Chadwick, as “a fucking lunatic.”  Expanding on 2012’s 3 disc version, this super deluxe edition serves up their complete Creation recordings from 1987-1988, together with a raft of rarities and previously un-issued bonus material. It also boasts all their Creation Records singles, from the original version of Shine On, Real Animal and Christine to their final single for the label, Destroy The Heart.

For the first time, the album is re-mastered from the original quarter-inch tapes and sounding as fresh as ever. We get the standard album, demos, b-sides, out-takes, live tracks and best of all, a disc of Peel Sessions.

Up first is the original album, beginning with one of the greatest alternative singles of all time, and one of the most influential for many future Creation artists, Christine. It has lost none of its charm. With a simple, repetitive, swirling, wall-of-sound opening, it is best played loud. The bass line dominates and as the song reaches a climax, I defy anyone who hasn't heard it before not to fall in love with it. Hope can't really top Christine, but features a charming vocal from Chadwick.  Road features a confident rhythm section with some pounding drums and a slick bass from Pete Evans and Chris Groothuize. Elsewhere on the album, Sulphur has a Stones-esque groove whilst Man To Child is much more laid back and reflective. Salome is more trademark House of Love, with a nod to arguably Chadwick's biggest influences, The Velvet Underground. Terry Bickers, their legendary guitarist really dominates on Salome and is easily one of the first disc's high points. The disc concludes with demo tracks originally given away as a bonus 7” with the album – Shine On and Christine. On its re-release in 1989, Shine On would be the song that catapulted The House of Love onto Top of The Pops. The demo version issued here has as much charm as the re-recorded polished hit single.

Disc two compiles the band's singles and demos. Many of their gems were to be found on b-sides as is evident on this collection, the instrumental Love being a prime example. Like the best bands, The House of Love were incredibly experimental on their b-sides. Tracks such as Flow and second single Real Animal would have sounded out of place on the album but they deserve a listen in their own right and for the more curious listener, disc two is a delight. The Hill, b-side from Christine, features lead vocals from original member Andrea Heukamp and shows what a key player she was for the band. Their last single for Creation – Destroy The Heart – is arguably one of their greatest moments.  Some of the finest moments on the second disc can be found in the form of  the demos presented here. Guy's primitive home demos of Shine On and Destroy The Heart, for example, have a real charm.

Disc three presents early mixes and more polished, 16 track demo recordings. The early mixes of Road, Sulphur, Happy, Fisherman’s Tale, Touch Me and Salome are exclusive to this release and have a freshness to them. Sometimes when a band are in the studio for a long time trying to perfect the debut album either band or producer may tinker for too long trying to get a sound just right. I'm not sure if that was ever the case with the House of Love but it is clear from the mixes presented here that the band have been captured full of ideas, full of drive and are as fresh as a daisy. The highlights on this disc include a stripped back demo of Christine, far removed from the finished article yet still delightful, Hold On Me and Destroy The Heart.

The best disc for me is the Peel Sessions collection assembled as disc four.  The legendary Radio One DJ and his equally legendary Peel Sessions were recorded at the Maida Vale studio in London and many of our greatest ever bands were graduates of the Peel Sessions. Always recorded in just a few hours, bands had to work quickly, with little or no time for re-takes or over-dubs. In essence, bands were captured live, and The House of Love excelled in this format as is evident throughout the three sessions here – from June '88, August '88, and April '89. The fact that the band recorded sessions in such quick succession shows the regard that Peel had for them. Indeed, Destroy The Heart was top of Peel's famous Festive Fifty in 1988, with Christine also in the top ten. The Peel Session version of Destroy The Heart has a real urgency and is perhaps the best version of the song. Other highlights here are Nothing To Me from the same session, an early version of later hit single Beatles and Stones – a much more chilled and blissed out version is presented here, and from the 3rd session, a laid back, almost acoustic Christine.

Of course, The House of Love were always a force to be reckoned with live and the final disc in this collection assembles tracks from two shows in Holland and one in France and England. All tracks from this disc were previously unreleased. Opening with a resounding Christine before Man To Child, featuring one of Guy's most powerful, emotive vocals. Shine On sounds even more incendiary in the live arena whilst Never has a garage/psych feel, not captured on the studio version. Soft As Fire is a real highlight on this live compilation as there's a fragility to Guy's vocals not found elsewhere. The Stooges I Wanna Be Your Dog was always a popular choice for many bands to cover and The House of Love treatment is every bit as good as you hope it would be. It is a fitting way to round off the disc.

This 30th Anniversary Edition is a massive collection of tunes and showcases every side of The House of Love. An essential purchase for fans and a great entry point for those who have yet to discover them.