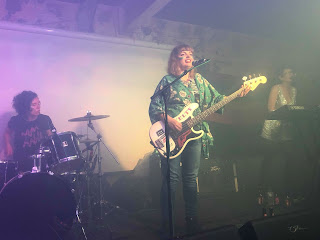 Saturday saw the latest installment of the Manchester Psych Fest. We caught Mold, Pearl City and ILL in three of the venues in the afternoon and early evening - three bands that show the diversity of sound on offer and the broad church that has gathered together under the psych umbrella.

The first band we see are Mold in a sweltering hot Night And Day Cafe, so warm it's close to their location of Purgatory in their Facebook profile. With painted faces, a saw player and a song that seems to stretch on forever in different guises proclaiming the need to "sterilise the nation", they set a confrontation tone for the day with an aggressive, direct set of songs that go down a storm as their set progresses and the venue fills up. 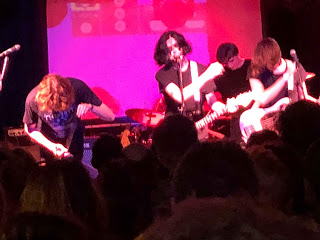 That anger that runs through their set is channeled to good effect though, it might not be the most inventive move these days to play a song in the crowd but when Dan ventures out amongst us during their finale, he scales the bench, eyeballs those not in the moment and finishes down on the floor with people staring down intently at him. Mold's approach might not be everyone's taste, but the response they get at four in the afternoon says they've won themselves a load of new admirers.

Back at Band On The Wall, Pearl City might be the antithesis of Mold, but their approach has people equally in thrall. Whilst Nick controls the music from a table of implements in front of him, Greta prowls the stage, throwing shapes, drawing the audience closer with a performance that's as much an installation set to music as it is her singing. She adds extra drama to the likes of Friends, an untitled new one and Down By The Tree by how she delivers the songs. 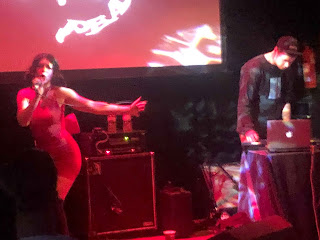 There's a dark side too, Redhouse is described as a song about murder "so you better be careful" as Greta moves around, arms outstretched, living every word she's singing and reacting to every change in the music it's set to. It's this that prevents them from being yet another art school project with more style than substance and turns them into something that you can't help but be absolutely captivated by.

There's something transformation gone on within the ILL camp in recent times. Where once they were an implosion waiting to happen as their innate desire to improvise and deliver the unexpected often led them down dark alleys with no way out, they've channeled all that energy, passion and excitement and worked out how to channel it to give exactly the impact they want. They start with an improvised piece that's not on their setlist that's already way too long for the set time they've got allocated, but until they tell us that at the end we'd have had it down as a new song. 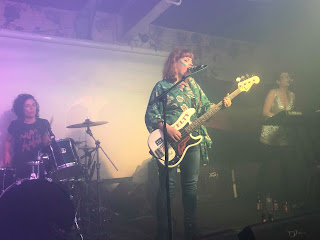 They then run through, in their own deliriously riotous way, tracks from their recent We Are Ill album. They encourage everyone to shout Space Dick back at appropriate times in the song, but the gathered crowd can't match the mischievous slant they put on it. I Am The Meat and Hysteria are delivered with a sniping tongue. They champion the outsider, shouting out to a guy called Graham who's pissed half the people off around him and when they ask whether we want the final song to be about a drunk fight or the Kremlin they chastise us for choosing the former. Harri ends up in the front rows, shoving guys who get in her way and ending up lying on the floor screaming the final lines of the song. ILL might be an acquired taste, but they're getting better and better.