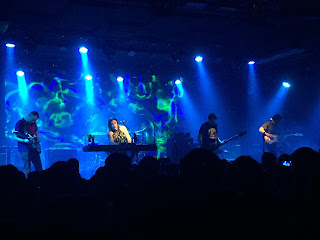 On 15th August, Slowdive announced a small Chinese tour taking place in mid-September. Having visited 37 countries since reforming in 2014, this is actually Slowdive’s second visit to China, after playing in Shanghai in July of that year. This gig does mark the band's first visit to Guangzhou, a huge sprawling super-metropolis of 13 million people, ranked the 7th largest city in the world by population, and the 12th largest urban area with a mere 48 million people.

Mao Livehouse is one of the latest in a chain of music venues opening across China. With a focus to promote events in tune with the ever-growing alternative music scene, the company operates venues in nine cities across China, including obvious places such as Beijing and Shanghai, as well as less obvious locales like Yiwu and Kunming. Considering Guangzhou is one of the largest cities on the planet, with an estimated 15 million residents across its sprawling landscape, as well as it being considered by many as the multi-cultural capital of China, it is perhaps somewhat surprising that Guangzhou was the most recent city in which a MAO Livehouse was opened.

Nestled under the Entertainment Complex and Shopping Mall 6th Element Experience World in the Wanshengwei district of the city, MAO Livehouse is a 600-800 all standing venue which offers live music in a modern yet still intimate venue. A sparse venue, with little in the way of artwork or decoration apart from a few branded signs on the wall in case anybody forgets which venue they are in. The venue as a whole is particularly well run, at least from the view of an audience member. Bar staff are polite and efficient, and unlike many venues of this size across the world, the bar offers a wide variety of drinks, at reasonable prices (by Chinese standards, by European or North American standards, the prices are extraordinarily cheap). Despite the humid climate of the area, the venue is well air-conditioned, although naturally still very warm, as Simon Scott on drums was seen intimating only four songs into the set.

Many words have been said about both Slowdive’s 2017 eponymous album and the outstanding nature of their live performances over the last four and a half years. Such repeating of words is not necessary here, but worthy of comment is looking at how the band fare in an audience outside of their traditional fan bases.

The response to this is simple, Slowdive received a phenomenal reception. Of course, a phenomenal reception does not necessarily have to translate over to an Arctic Monkeys style crowd of everybody singing along loudly to every single line of every single song, this was a crowd of devotees, the vast majority of whom had clearly never had the opportunity to see the band perform live before. Many of the crowd braved the unpredictable weather to queue outside the venue long before doors opened (those that did were treated to a soundcheck which sounded phenomenal even through the closed doors of the venue), whilst many flocked to the merchandise stall to pick up everything they could, whilst the majority seemed to be clutching as  much memorabilia as they could carry, in the hope they would get the chance to have a band member autograph it.

So to the gig itself. With smartphones being as much about social status in China as a means of communication, it was inevitable that many would make an appearance. Thankfully, many used it only to take a few quick photos of the gig (hard to begrudge, given the circumstances) with very few taking the opportunity to film huge swathes of the gig. There was minimal talking in the audience, with everyone paying full attention to the performance in front of them.

And what a performance this crowd was fortunate to witness. It is hard to think of a band who have returned after a two-decade split, who release arguably their finest album and produce the quality of live performance that Slowdive provided the assembled throng in MAO Livehouse with. It would’ve been very easy for a band in this situation - a long way from home, likely jet-lagged to some extent, not a particularly large venue and a potentially very forgiving audience - to just phone it in.  Slowdive offered not even a hint of this. Whilst the set was hardly a departure from gigs over the last year or so, the band can hardly be criticised for this. This was a gig where the band gave the audience what they wanted, a wide mixture of material from the critically acclaimed eponymous 2017 album, and a collection of songs from the first three albums.

A more traditional Slowdive audience may find it somewhat surprising to hear that it was the tracks from the 2017 eponymous album that received the biggest reaction, ‘No Longer Making Time’ (easily one of the best tracks they’ve ever done) and ‘Sugar For The Pill’ were both received rapturously by the audience, with huge cheers and many phones coming out to save the experience. The audience was however enthralled by the entire gig, being perfectly respectful by not talking (very much an audience which wanted to be like Ralph) and offering loud, yet polite, applause and cheers to every song. From the opening moments of Slo-Mo, through to the epic closing of 40 Days, this was a band operating at the peak of their considerable powers, determined to offer the dedicated crowd an experience they wouldn’t forget.

From the sight of Rachel Goswell returning smiles with members of the audience who caught her eye, Nick Chaplin bounding around the centre of the stage eyes intently focused on his bass guitar, the and Neil Halstead effortlessly wrestling his guitar whilst producing the most phenomenal sonic landscape in tandem with Christian Savill, and on occasion Goswell, this was an astounding performance from a band seemingly at the peak of their powers, both creatively and in the live environment. With chatter as usual kept to a minimal, with the exception of Halstead's comments about an incoming Typhoon and how such weather is not seen often in Cornwall.

A special mention needs to be made of Martin Mittler on the sound desk, who two days before had been with The Kooks in Bexley-On-Heath, who then flew to Guangzhou (against the time) and enabled the band to produce a sound which was crystal clear throughout the gig.

Also, after the gig, all five members of the band sat and posed for photographs and signed the aforementioned memorabilia. The queue must have been two hundred deep, and whether they had enough time to stay and sign everything remains to this writer unknown. But all the members of the band were quite jovially chatting with some very star-struck fans, despite having travelled around the world and just played a live show.

Slowdive continue their 2018 dates with appearances at Desert Daze Festival in California on 13th October, Simple Things Festival in Bristol on 20th October, BIME Festival in Bilbao on 26th-27th October, before finishing up at the 02 Arena London on 13th December with The War On Drugs.

Slowdive played : Slo Mo, Slowdive, Catch The Breeze, Crazy For You, Star Roving , Avalyn , Souvlaki Space Station, No Longer Making Time, Alison, When The Sun Hits, Sugar For The Pill, Golden Hair plus an encore of Don’t Know Why, Dagger and 40 Days

Email ThisBlogThis!Share to TwitterShare to FacebookShare to Pinterest
Labels: Slowdive