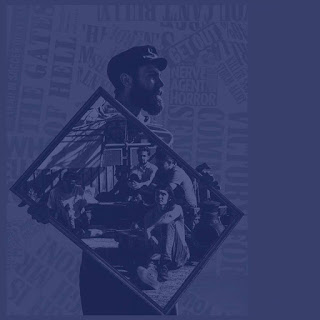 FTK is the new name of Feed The Kid. After a time out of the spotlight, they're back with a new single Strange Times and a second track Dirty Jokes, exclusively revealed here, ahead of their comeback set at Ramsbottom's Head For The Hills Festival on Saturday. We caught up with front man Curtis to find out what they've been up to and what we can expect from this new phase in the band's existence.

It's been a while since we heard anything you. What's been happening?

Well, we decided to take a hiatus; to write, create, and try take things in a new direction. During this time we pretty much locked ourselves in our studio, so we are sitting on quite a lot of music.

You've abbreviated the name of the band from Feed The Kid to FTK.  What prompted that change?

I think this came from the sound progressing, and becoming something different to what we were before. Ciaran and I (Curtis) set up Feed The Kid, so it still has the Feed The Kid DNA, but we felt the new direction needed a new banner, so just simplified it to FTK.

Have you kept the same line-up?

No, another reason for the name change really. The sound changed by adding new members, which has had a positive effect, and has pushed us on. The first few singles will be a bridge from Feed The Kid to FTK and after that you will see more new musical influences.

The reason why we added new members is because unfortunately life often rears its ugly head, and people have to take chances in other fields, which means sacrifices have to be made.  The lads that have left are the first ones we send the music to, so they are very much still a part of it.

Does it feel like a new start now and how are you going to do things differently from before?

It really does. There’s a new lease of life, a new creative energy, and new buzz within our small camp.

In respect to doing things differently... I think there’s only one thing, and that’s not to look out, just concentrate on what we are doing, create the best songs we can create, and keep building on it. The music is solid, and we believe it in, so that’s what counts.

You're making your comeback at Head For The Hills Festival at the weekend. We remember one special performance there in the pavilion. Was it a conscious choice to go back there for the first show in a long time?

It wasn’t a conscious decision, it just fell at the right time for us. Our friends from The Met and Scruff Of The Neck have always stayed in touch, and we let them know we’d be ready if they’d have us.

I personally love this festival, as it has a lot of emerging talent. I have watched people like The Slow Readers Club work their way up the festival to be headlining this year, and deservedly so. For me they’re the champions of our scene.

You've put Strange Times out as the first track - could you tell us a little bit about that song?

It’s a political motivated song. It’s a message about our unresolved emotions in the political climate we find ourselves in. Asking ourselves questions, as well as the listener, to see where we stand, and if we are going to stand up.

And you've very kindly given us another called Dirty Jokes as an exclusive reveal.  Could you tell us what's behind this song?

It’s about hypocrisy… Leaders and people in power having their own set of rules and laws… “Do as I say, not as I do”.

The reference we have used is the church, but extends itself to that running political theme, and how every corporation bends the rules for its own cause.

Have you spent the time away writing a bank of new songs and will your sets now be predominantly new material or will we still here the old favourites?

There’s so much material we are sitting, that it will be an all new set. The old ‘Feed The Kid’ just wouldn’t fit with what we want to do, and where we want to grow.

What are your plans for after the festival?

The next gig will be our single launch for Strange Times at Night & Day in Manchester on 23rd November. The plan after that is to release music into 2019, as we are currently sitting on fifteen mixed/mastered tracks and are still creating. It’s important for us to get them out so that do not become stale.  2019 will see us come back properly and starting gigging around the UK.

Email ThisBlogThis!Share to TwitterShare to FacebookShare to Pinterest
Labels: Feed The Kid, FTK