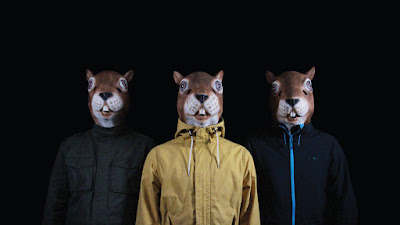 Last year we described Mano McLaughlin's set at Head For The Hills Festival with these words - "His set featured new songs from his follow-up to 2013’s Peach Got Bones and demonstrates he’s not lost any of the ability to craft beautifully observed songs that might be personal to him, but can find resonance with anyone, which for us is the greatest thing any songwriter can ever do." A year on, as he prepares to return to Ramsbottom and with the release of Then Lightning, the title track from his forthcoming album imminent, we caught up with him for a chat.

You're about to release a new single Then Lightning, the title track of your forthcoming album.  Could you tell us a little about the subject matter of the song?

It's a song that ends where it begins. A cyclic journey, each verse travels from peace to chaos. Maybe its some squinty eyed look at the light and dark of my own life. My cousin Ben told me about the crack addict squirrels in Central Park and they are the metaphorical baddies that turn up in the first verse.

The artwork that accompanies it shows three people in animal masks. Where did the idea for that come about and does it have some specific meaning?

That'll be those squirrels again, I was going to go on about the shamanistic qualities of masks and music and how we all wear some kind of mask anyway. But honestly, it’s that photo shoots are a mare and if you can hide your gurning head behind some animal’s face and get away with it.... and well... if the LP flops we can always use them for a bank job.

It's been five years since Peach Got Bones, a long time between records.  What has been the delay in releasing the follow-up?

Man...5 years? not sure what happened there. Life? Proper jobs? ... its hard to justify spending all your time making music when the kids need new shoes. I did make an album of pirate songs with Daniel Jones and Grania McLaughlin somewhere along the way. Lie Doggo.

Have the songs from Then Lightning been written across that five year period or were they written together?

I finished writing them a few years ago so they’re already starting to feel like somebody else’s old clothes. I write all the time so I probably have enough in the shoe box for another album... or a small bonfire.

What's your songwriting process, do you write on your own and do the songs come fully-formed?

Sometimes I find them in the bottom of a bottle of wine, they fall out like those crap plastic toys you used to get in cereal boxes. Sometimes they come along in time to the way I’m walking or cycling. I try not to force them or they just fly off like a bar of soap held too tightly.

And what inspires you for subject matter?

I dont know to be honest, they just happen and then I try and figure out what I’m on about afterwards.

Do you have a release date yet for the record and how are you planning on putting it out?

Think we’ll put it out February..ish next year. Limited vinyl and the usual digital.

With a band, I toured on my own for a couple of years, which was nice, you’re much more approachable if you’re not hanging out in a gang and I met some lovely people. But you can’t beat playing in a band, it adds up to something greater than the sum of its parts. I’m lucky to be playing with Tim Thomas and Gary Hadfield they're great players and good friends, we recorded the album together and they know their onions. It’ll just be the 3 of us for a stripped back set at Head for the Hills. There’s a fair bit of clarinet and reed organ on the recordings, so we’ll be growing into something bigger for the gigs later in the year.

Your set last year at Head For The Hills had a packed audience in the pavilion and a rapturous reception for a set of songs they wouldn't know as they were mostly new ones. Are you looking forward to going back there this weekend and does it feel like a special place to play?

Cheers Dave, Head for the Hills was great last year, there is something special about that festival, warm, open armed people, up for giving you a chance, we’re really looking forward to going back there.

You have a number of well-known champions like Guy Garvey and John Bramwell. When you look at the success they've had, does it make you feel that you could have achieved similar or was that something you never wanted?

I’m a lucky man, Guy has said some lovely things about my writing, high praise from one of the best writers and performers alive today. I don’t know what success means, could haves and should haves are dark alleys for me, I’m happy enough, I’ve had some right adventures and always had just enough excuses to carry on carrying on.

If you had to describe Then Lightning to someone who'd never heard of you before and picked the record up, where would you start?

It’s a record that started out crawling as a low-fi eccentric folk home recording, then walked into Manchester’s best recording studio. Tim Thomas mixed the lp leaving in the groans, squeaks and dog barks from home. There’s a gentle acoustic song which has a clunky cement mixer outside the window, Danny Evans, did us proud with the mastering and we ended up with something polished but happily imperfect.

He plays Salford Blueprint Studios (September 12, with The Plumedores), Ramsbottom Head For The Hills Festival (15) and launches the Then Lightning single at Salford's Eagle Inn on October 26.