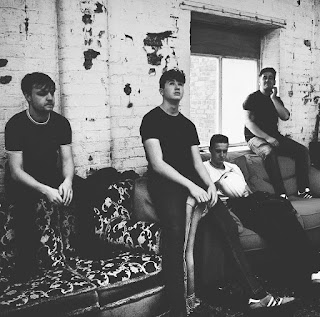 It's been quite a year for Urban Theory so far with sold out shows at Soup Kitchen and The Deaf Institute in Manchester. Ahead of a homecoming of sorts at Ramsbottom's Head For The Hills Festival on Friday night and their biggest headline show to date at Academy 3 in October, we spoke to Alex about their forthcoming single Mandy and what they've got up their sleeve for the rest of the year.

Your forthcoming single Mandy has already had a couple of plays on BBC Introducing Manchester. How does it feel to have that support for a song that's not even out in the world yet?

It’s fantastic that we have had so many plays from BBC which has been really appreciated from the lads as we have really high hopes for the song. We have taken our time in the release, as we believe it deserves to reach as many and the right people in order to get a big reaction. This is due to previous releases not reaching the audiences we had hoped for.

In addition, Mandy is very different from our other material which has led to a lot more thought than our usual kind of sound so we wanted to make sure the people in the music industry had a taster of the song before the actual release. Mandy was also one of the first songs we wrote as a band, so we always wanted it to be special.

Could you tell us a little about what the song is about?

The song symbolises depression and also highs, as well as ways of escaping the normality of life for all kinds of people. This is because the song relates to medication of a sort no matter if it's recreational or prescribed. People see this way of life using substances as a way of overcoming things that get thrown at you. To be honest the song is hard to explain, however it relates to everyone in some way, depending on the way you understand the lyrics as there are so many hidden meanings.

Mandy feels like a big progression in your songwriting from the likes of Weekend Offender and Fishbowls. Is it the direction your new material is heading or will you still have those short sharp headrush songs in your set?

Mandy is a one off, it was a song people had been talking about mostly after our gigs, so sometimes in music you have to listen to the most important people, the fans.

However, who knows? We may end up writing more like Mandy, however for now we like what you would call “short sharp headrush songs.” We try to vary our set so that we don’t have a full set of similar sounding songs, because we are still young and don’t exactly know where we will be over the next few years. This is really exciting to us as we are still growing in experience, songwriting and as musicians.

It's a couple of years since we first saw you at Soup Kitchen, what have been the highlights in that time?

The band has so many great experiences and there have been highlights for different reasons. Firstly of course was when we played Gorilla with our friends Ist Ist, this was because it was the first time we played to such an audience which gave us a lot of tips and experience to improve our live set.

However coming back to a sold-out Soup Kitchen a year later as headliners was also special. I believe the next few months will be massive for us, with us playing Head for the Hills, due to it being our hometown (Bury) where we all grew up and went to school. And the fact we our headlining Academy 3 in October is also massive for us.

Being in a band alone though is a massive thing for us as it is something the four of us love more than anything, as playing live music to entertain others is what we have always wanted to do.

You're playing the Friday night of Head For The Hills with The Slow Readers Club and LIINES. As a Bury band what does it mean to be playing a festival so close to home?

It’s the best, we’ve always wanted to play this one especially with it being so close to home. Also, as you say sharing the same bill as The Slow Readers Club who at the moment are the biggest talked about band in town, this to us is such an honour.

And what can we expect from your set?

Expect energy, punch and maybe a new one

After having played with Ist Ist at Gorilla last year, you're playing Academy 3 as a headline. Are you surprised that things have started to happen the way they have, playing in venues that you'd go and watch bands that break playing at on their way to the academies and arenas?

In a way we are surprised this is because venues that are notorious such as Gorilla and Academy 3 are venues we only dreamt about when watching other performers on that stage. However now we are the ones people are coming to watch perform which is pretty surreal. Part of this journey and rise has been to do with the help from Scruff of the Neck this is because they have offered and helped us to get to the place we are now at through all their team contributing in different ways. Also, you guys at Even the Stars, have helped us along the way from reviewing and pushing us from the start at Soup Kitchen.

What do you have planned after the festival?

Hopefully to go and watch Readers!

Then after that, back to focusing on the release of Mandy and our biggest headline show to date at Academy 3 in Manchester. Also, we are going over to Liverpool for our first out of town gig supporting Turbulence at EBGB’s the day before Academy 3 with Scruff of the Neck. New material is on the agenda too and may be introduced at the upcoming gigs.