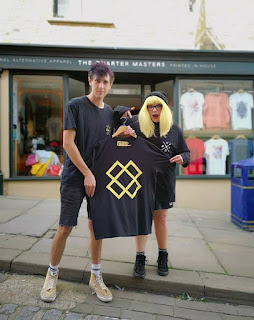 X is the latest single to be taken from SKIES' EP of the same name ahead of a short four-date tour later this month. The striking video for the single, shot by Visual Line, focuses around the song's line "I don't know what I'm doing here" as Alie and Jericho look to try and determine where they are in a forest.

With scary eyes showing no eyeballs and scenes shot like Coldplay's The Scientist where they walk backwards in reverse time to the music, the video captures the audience's attention and fits perfectly with the sentiment in the song's lyrics.

In a recent interview Alie told us about the song : "It’s called X because the title track is called X and that’s called X because it’s a song about existence. I didn’t want to call it Unknown or something cosmos-y or weird like that. I was scrolling through the thesaurus looking for words that meant unknown and X appeared. And I thought that was quite cool and Jez didn’t think it was a stupid idea."

The X EP is out on now. Our review can be found here.

Our recent interview with SKIES can be found here.