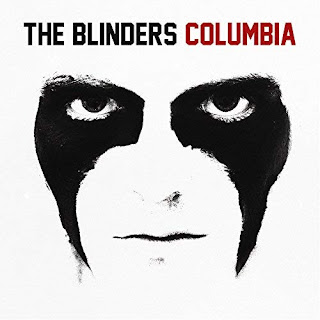 Many a band have had the albatross of saviours of rock and roll hung around their neck until it choked them. The latest young band to have that accolade circling them is The Blinders as they prepare to release their debut album Columbia. Are they the real deal or the Northern equivalent of SMASH for these Brexit times?

Hype can be a dangerous thing, suffocating a band before they've found their own identity. Fortunately The Blinders have no such issues on that score, clearly marking their territory on a series of singles - Gotta Get Through, L'Etat C'est Moi and Brave New World - and some incendiary live shows that have increased in intensity exponentially as their fan base has grown with it. It's a tough ask for a band still in its relative infancy to live up to that on a debut album though in an increasingly disposable world, but it's their attack on that very world that makes Columbia the record it is. It's not perfect by any stretch of the imagination, but its flaws, their refusal to polish it to the point of removing any sign of rough edges and their knowing nods to influences both literary and musical make it the boldest statement in a debut record this year and for some time.

As is the fashion these days the album starts with singles. Gotta Get Through is a urgent opener that's already gained them significant radio airplay. Guitars like air raid sirens, drums tribal and raw and a breathless vocal make them stand out a mile from the crowd and it's this that has seen the plaudits thrown their way by those looking for something different, something that matters. L'Etat C'est Moi takes a socio-political stance - "I'm the state, a subject's all you are, I've got divine right" - that's more powerful for the fact it's unspecific and therefore not time-bound.

Hate Song is a rolling rambling track, one minute taut drama, the next a laid back languid riff, the next threatening to exhume Ian Curtis and recreate Joy Division in the here and now and the next in a cycle of repetition of words to drill their message home. It's a lot to cram into a four minute song without sounding disjointed and unfocused yet they manage it. Where No Man Comes is equally claustrophobic, an unsettling combination of the riff and drum patterns ushering the song in with a hint of latent menace that has you on tenterhooks but then leaves you hanging at the end.

Free The Slave clocks in at eighty nine seconds, a poem set to dramatic music that goes back to some of their very earliest shows and it's one of the moments on the record where you can feel that intensity of their live shows as it feels like they're preaching to you, condemning "those fucking crooked vultures that do not care" before crunching to a halt. I Can't Breathe Blues is another throw back to their early days, a re-recorded version of that standout track on their 2016 Hidden Horror Dance EP. Here they're into specifics, the 2014 death of Eric Garner at the hands of a New York policeman employing the chokehold. The haunting recording of the event might not feature in this version, but the message is still stark and clear as the battle cry rages "an eye for an eye, a tooth for a tooth."

Things slow down for The Ballad Of Winston Smith, a nod to the lead character of George Orwell's 1984, talk of "foxhunt the refugee for the real man to see" and "men and women worked to death, a life of lies, there's no green grass" painting a picture that‘s as bleak as the one the country, and lands further afield, faces right now.

It's a brilliantly timed interlude before the rampaging duo of Et Tu and Brutus form the heart and lungs of the album. Et Tu has scurrying insistent drums pounding out the call to arms before an outtake of breath changes the pace and tools it up with guitars. Half of the two minutes are instrumental, the second half proclaims about martyrs dying alone on the cross. It's a precursor to the main event though, a seven minute trip that at times feels like a stream of consciousness, a trip through their creative thought processes without stopping to think about how and where they join up. Whilst it's based around Brutus and Caesar, there's many parallels to be drawn to the politics of today with references to "bands of cut-throats ready to take your purse" and "they're going to build a Berlin wall to divide you and me." It's something that few bands of their generation would contemplate, either through fear of sounding ridiculous or having such extravagant thoughts drummed out of them by those advising them in the search of the next three minute banger and colourful video to feed what they think the kids want..

Brave New World is the nearest to that they come up with on Columbia, the nearest to a singalong chorus "oh to be from the land of the free" and with a big strident riff that runs throughout it. Rat In A Cage has a similarly uplifting and immediate feel, whether it be the harmonica over the opening, the beat that's made for thousands to raise their hands and clap along to and the rallying call of the chorus "come together, we need each other... come together, put your arms on my shoulder." The album finishes with Orbit (Salmon Of Alaska) which has the feel of a modern day Birdland in the way the story is told in a similar style to Patti Smith without ever aping her style.

So where does Columbia place The Blinders? It's an impressive debut, one that captures the essence of what they're about and as much of the live performance as is possible within the constraints of a studio recording. It doesn't compromise their personalities and the real core of what they're about in search of a hit radio-friendly album, but it's that which has caught the ear of those that champion them. They have influences but not too overt, their songs observe rather than preach, talk of politics in its social context attacking ideologies and beliefs rather than directly attacking individuals which give it more gravitas. But most important of all they remain true to themselves.