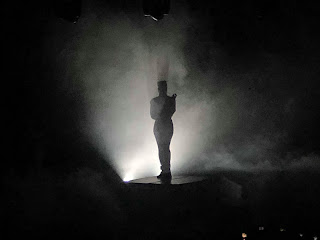 Back in Manchester for the first time in four years, Janelle Monae's show at Academy 1 sold out in minutes with the most diverse gig audience we think we've ever seen coming from far and wide to celebrate one of the few genuine iconic figures that still exists in music today and a champion of LGBTQIA rights and racial equality with a message that's unequivocally positive to anyone listening to be who you are, be proud of who you are and to love yourself.

"No matter who you love, you're welcome here anytime. If you came on your own I love you" yells Janelle at the start of Prime Time to a deafening roar from the three thousand or so devotees crammed into every corner of Academy 1. It's the same every time she speaks, the roars of appreciation and love almost drowning her out, so she tells us even louder. As she surveys the crowd before I Like That, she declares that "there's so many extraordinary faces. Self love is what makes us unique even if it makes others uncomfortable" then proceeds to point at people in the audience and calls them out for a distinguishing feature and tells them "I like that shit."

That feeling that she's talking to everyone individually is accentuated when she invites four audience members up to dance with her, in their own solo slots, during I Got The Juice. It's a compelling message from her own experiences and coming to terms with her own persona and dealing with all the shit that comes with it, but it's one that connects with everyone in the room, even the awkward out of place looking guys like us that haven't had the homophobia, sexism, racism and all those other evils thrown at us at every turn.

The show is phenomenal from the opening where Dirty Computer is played from tape to build the already fever-pitch atmosphere to a high. With the stage in darkness except for Janelle's silhouette dancing on a podium, she opens with Crazy, Classic, Life and the crowd's arms sway in time with her command. She's backed with four dancers, who either accompany her moves or act as a contrast and who have as many costume changes as she does, two guitarists, a drummer and two multi-instrumentalists who provide brass to the mix. Musically, it's a real melting-pot of styles, there's the inevitable nods to Prince (and Purple Rain is mixed into the instrumental outro of Prime Time), but then there's rivers of rhythm and blues, funk, soul, classic eighties pop and even rock and roll as the guitarists come forward and let loose with solos. 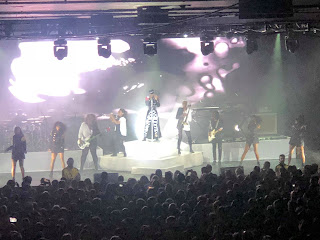 The set is heavy on tracks from Dirty Computer as you'd expect with this being her first visit here in support of her most recent record. Everyone appears to know every word, mouthing them back, singing them on demand whether it be the new songs such as Screwed or when three thousand holler back "Hey" with the brass on Electric Lady.  It's a stunning light and sound show, one minute the stage bathed in bright light, the band lit up, Janelle and the dancers prowling the stage and the steps to the throne with the band jumping around at the back, the next bathed in darkness with the spotlight on Janelle like at the start of Q.U.E.E.N.

It feels like it's been carefully choreographed with attention to every detail, but somehow doesn't feel like it's ever going through the motions. Even in the elongated sections of Tightrope, which has about half a dozen endings, and the encore of Come Alive (The War Of The Roses), where she at one stage crouches down behind an unsuspecting security guard in the pit before launching herself on her back into her throng of admirers and surfs back and forward, she never loses the crowd in the pursuit of perfect choreography. When she tells us she loves us, as she does often during the night, you know she means it.

She has the crowd eating out of the palm of her hand right from the start, the reverence that she's held in is unparalled and we've never seen the Academy bound as one when she tells us to jump, sway our arms from side to side or crouch as she bids us to get down. In a world where hate is finding its voice again, she's the most perfect antidote to any form of phobia and bile with a message that's simple, all-encompassing and an inspiration, all rolled up into one of the most outstanding live music experiences you're likely to witness.