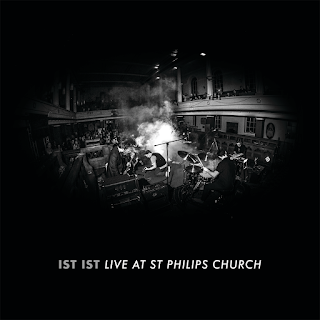 Last year Ist Ist released a guerilla recording of their sold out Gorilla show that sold out itself almost immediately. A raw warts and all audience capture was a move braver than most bands would ever dare. For their latest limited edition release, Live At St Philip’s, they’ve employed more traditional methods but with even greater impact.

Ist Ist’s transition from a three- to a four-piece is captured on this eight-song set from their latest sold-out show. Featuring the debut of keyboard player and guitarist Mat Peters, it also serves as an introduction to two new songs Exist and Son Is The Father.

It’s clear from the outset the possibilities that this expansion opens up. Preacher’s Warning is even darker, more cloying and claustrophobic than it is on record and the mix captures plenty of subtle nuances and fluorishes on the track that might have otherwise been lost on the ear at the show. Exist harks back to the Ist Ist that drew people into their early singles, but with a drive and sense of purpose of a band with the confidence that ever-growing audiences bring. It lays bare the misconception that they don’t write songs you’d hear on the radio.

Emily follows, with Adam’s handclapping along with the audience audible over the introduction. It’s a song that’s steadfastly refused to cow to the new songs on the block and remains central to any Ist Ist set. It’s now so imposing that an untrained ear might mistake its impact for that of a band filling venues ten times the size of this. The second new track, Son Is The Father, starts with a cutting bass line that those who like to compartmentalise would use as evidence in their comparisons, but it’s only the weapon of choice that’s valid here. The song deals with birth and death and you can hear the anguish in Adam’s voice at the end.

Silence, like Emily, destroys those notions that Ist Ist cannot shake off dark stereotypes. It possesses a chorus on this version that’s at least as powerful and insistent as anything supposedly more accessible bands could deliver. As the breakdown builds back into the explosive final chorus you can’t help but picture the front rows throwing themselves around. Night’s Arm threatens to rip your head off with huge riffs, drums that dictate the beat and a snarling vengeful vocal that would terrify those of weaker constitution.

If this hasn’t finished you off Strangers comes steamrollering in with a huge chorus that even outflanks the recorded version which doesn’t do the violent energy of this song anything close to justice. Here you know the explosion of the chorus is coming but it’s still overwhelming when it hits you. Diversion sees them fully letting loose, stop-starting their way through a song that lobs aural hand grenades liberally wherever they think they’ll cause most damage and ends in a blood-curdling scream.

Live At St Philip’s is the sound of a band discovering the power and precision of what they do. So confident in their ability that they eschew the industry’s modern day method to releasing songs one by one and making them feel disposable, Ist Ist’s approach is refreshing and challenging the norms. Not for them the kiss arse immaculately and excruciatingly polite games that bands are expected to play these days and they’re finding increasing resonance with an audience that want a band to fall in love with, that takes no prisoners and isn’t afraid to put their music out in the world in such ways as this because of an unerring belief in it. Whether they get further success or not, the legacy of releases like this will write them large in the mythology of the city’s music scene amongst those that hold such things closest.

The Live At St Philips CD is available to order from the band's shop along with their recent Spinning Rooms EP.