The Slow Readers Club - For All Here To Observe 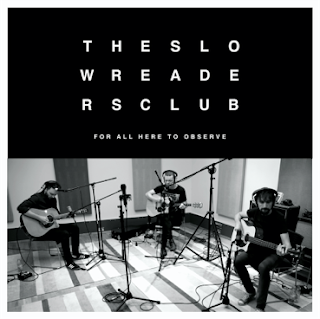 For All Here To Observe features six tracks from across The Slow Readers Club's three albums to date revisited in a stripped down studio environment. Like so many great bands the songs take on a completely new life with a different approach due to the songwriting craft that underpins the raw materials that make them up.

The EP starts with Supernatural, one of the band's and fans' favourites from the recent Build A Tower album and of course their latest single. For us, although this is closest to the original of all the songs on the EP,  this version is superior to the album version as the stripped down feel to it and the more intimate vocal by Aaron brings out the beauty in the song, particularly where he declares "so I pour heart out, surrender all too easy" and "anxiety, my constant companion, I gave you everything" the intensity of the words have greater impact than when they're fighting for space on the single.

The opening bars of the next song, On The TV, are only really recognisable if you know what's coming. The future indie disco dancefloor is taken right back to an acoustic guitar and a haunting vocal from Aaron full of pathos and lingering regret and resignation. The beauty of this translation is that the destruction of the world and humanity contrasts even more painfully with the father / son conversation of the verses. Whilst this will no doubt be their big anthem in a few months time, this version allows you to sit back and contemplate the song's real message.


I Saw A Ghost is an inevitable choice given the doors that the acoustic version at Manchester's Central Library opened up for the band. Whilst this rendition remains fairly true to the recorded version, the acoustic instruments create a lot of room within the song for everything to be heard, the simple nuances in David's drumming and Jim's bass that can often be overlooked. The claustrophobic nature of the lyrics lies even starker within these more bare surroundings, the middle eight even more resigned to the fate before the instrumentation drops back to a flicker as Aaron picks over the bones of what's going on inside his head for the last time in the final verse.

Forever In Your Debt is another song that's undergone a radical remake without losing the qualities that made the original give them a big step up when it was released as the first single from Cavalacade and makes it such a fan favourite. The declaration of love of the title feels even stronger on this version as you can almost hear the emotion cracking and the richness in Aaron's voice as the others create a stop / start effect in the verses.

Build A Tower's lead single Lunatic is a revelation in this form. Already aired at some of their acoustic sets in the past year or so, the driving beat of the single is replaced by something more considered and restrained but no less impactful. When Kurtis' vocal kicks in to accompany Aaron as the song hits the "build a tower.." section, the depth and contrast between the two is put into stark focus whilst that uplifting sense the song gives you at that point is retained.

The EP concludes with the only track from their self-titled debut Block Out The Sun. That album is still an undiscovered gem for many latecomers to the Readers party and hopefully this version will have them seek it out. A simple acoustic riff opens up the song, creating tension before Aaron has even sung a word and that builds as the drums kick in half way through the first verse to give the song a racing feel into the chorus, a trick that's repeated throughout the song. There's a sense of longing in the vocals, especially when Aaron holds a long note towards the end, that accentuates the words that are being sung.

The links may be tiresome by now, but what The Slow Readers Club have done here is exactly what their mentors and friends James have been doing for years (see the recent acoustic versions of Leviathan and Coming Home Pt 2 as evidence) by taking huge anthemic songs and ripping them apart and rebuilding them into something more delicate and more often than not more emotionally charged and impactful than the originals. This is the sort of level that The Slow Readers Club are operating at these days. Whilst these songs may be hollered back at volumes that threaten to drown out the band, these versions are every bit as vital as the originals to really understand The Slow Readers Club. Best listened to late at night with the lights down, this is as essential a piece of their catalogue as anything they've released beforehand.