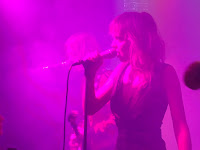 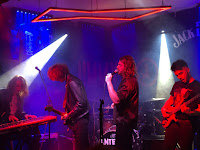 Anteros closed Jimmy's Independent Venue Week series of events with an exhilarating sold-out show that confirmed exactly why they registered so high in so many tips for 2018. Running through tracks from their two EPs, recent singles and two as yet unreleased songs from their debut album they're in the process of recording, they held a packed room in their spell for three quarters of an hour. Support came from Manchester's own Gathering Of Strangers.

The room was already pretty full by the time Gathering Of Strangers made their entrance, working through tracks from their recent debut self-titled EP including opening track Something In The Water and Lose My Mind as well as newer tracks like Lucifer and Man Inside Your Mind. There's a real intuitive feel and flow to their music that makes it feel like they're doing the most natural thing in the world to them. Their songs are expansive in their scope, seeking to lift their audience, grab and then hold their attention as they soar off into the near distance at the most opportune moment. Their relentless gigging has seemed to pay dividends as they're now an exceptionally tight and together outfit with a canon of songs that's starting to match their lofty ambitions.

Jimmy's is as packed as we've ever seen it by the time they come on stage, Laura appearing out of the crowd to take the stage. It's as diverse an audience as we've seen in here for a long time too in terms of age and gender mix, but there's a genuine buzz and excitement to see this band and right from the offset as they launch into Cherry Drop they win everyone over. Laura, Jackson, Josh and Harry create a sound that fuses rock, indie and pop music with a nod to the past but which sits right in the here and now, an infectious energy coursing right through the very heart of everything they do tonight. Jimmy's stage can be quite limiting due to the venue's size, but Laura takes to the monitors so the audience can see her at the back and she can see them.

There's two songs from the debut album that they've spent the second half of 2017 recording - and Full Moon and Wrong Side show a band that's continuing to develop but without losing the energy and excitement that their Breakfast and Drunk EPs and recent singles Bonnie and Love have generated. It also reminds us how much great music they've already created in such a short space of time. 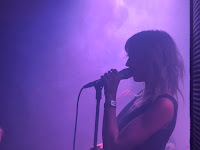 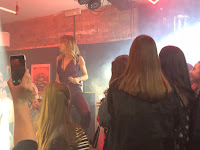 They thrive on the connection they make with their fans, Laura smiling excitedly half way through as she tells us she can hear people singing the words back. It's not hard to fathom why. Laura opens up as she introduces Bonnie by telling us that for years she didn't like everything about herself and wanted what others have, but the song is about believing that you're good enough and celebrating what you are. It's inspirational to anyone, but to make her point, she invites girls in the audience from the first few rows on stage to sing it for them and to them. One look at her face and the faces of the girls singing it back to her shows how empowering music can be.

They finished with the song the band is named after (or vice versa) and as Laura again stands tall on the monitor surveying her new acolytes, there's a buzz in the room that's often talked about at these shows but which seldom actually matches the enthusiastic claims. There's no need to hype Anteros up, they do that for themselves with the power, style and attitude that they bring to a party that everyone's invited to.

Email ThisBlogThis!Share to TwitterShare to FacebookShare to Pinterest
Labels: Anteros, Gathering Of Strangers