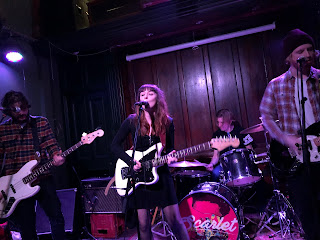 Scarlet brought their Quelle Surprise Bison Frise tour to the Castle Hotel in Manchester for an intimate hot and sweaty show in support of their new single Bones.

We make it just as Scarlet come onto stage and the room is a contrast to the cold outside and Scarlet's energetic set makes the place a whole lot warmer, Jessie's hair is almost plastered to her by the end of their forty minute set during which she hardly ever stands still, a hyperactive bundle of energy fronting a band that have grown in strength through the adversity of the confusing release of their debut album Effigy, which you still can't buy or stream in the UK other than from their Bandcamp site.

The set is made up predominantly of songs from that record, and it underlines what a shame it is that the band have suffered at the hands of whatever record business chicanery has prevented it seeing the light of day. Opening track Alone, the brilliant single Your Control and the fabulously titled Who Left The Iron On? are infectious songs driven along by the combination of Jessie and Adam's guitars, Gianluca's bass and Jacob's drums to create a real whirlpool of sound which complement Jessie's often breathless excited vocals which are delivered with a passion and belief that their time will come and the packed crowd's response at the end of each song suggests they've already got a room full of converts. 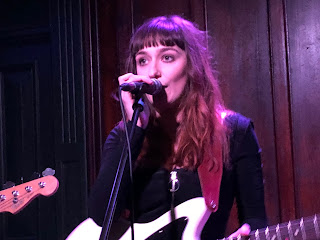 They add a couple of new songs mid set, 20/20 and 10, both which have that same energy and vibrancy, but with a stronger sense of purpose to them, something that their new single, and best thing they've released so far, Bones confirms as it closes the nine-song set. It's a song that means business, hitting the listener with a series of punches that you can only reel back from and accept your fate. There's demands for more from the crowd that's now packed in tightly yet avoiding the one-man moshpit centre front.

Scarlet are one of those bands that are still following their path, convinced that it will one day lead to a pot of gold at the end of the rainbow. They do so with growing conviction every time we see them play live.