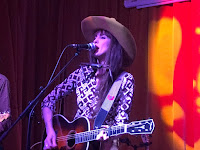 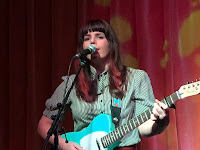 Jaime Wyatt and Beth Bombara brought an Americana double-header to Gullivers on Tuesday night for both of their first visits to Manchester as part of a UK tour. An appreciative audience took in both sets with collaborations, special guests and laced with a lot of goodwill and humour on top of both their impressive collections of songs and stage presence.

Beth opens up proceedings with Sam on guitar and Kit on drums and bass. Once some initial problems with the volume of the drums are resolved, we're treated to a set that weighs heavily on her latest release Map And No Direction, one of our surprise finds of last year. Live, the songs have a harder edge to them, both musically and in Beth's vocal delivery without either compromising the intimate confessional nature of the songs.

We're not sure how many of the audience are aware of Beth beforehand, but as both artists comment, the audience response is the sort that every gig of this type should have, attentive, listening and not afraid to show their appreciation at the end of each song. Beth's engaging, both with us and with the band, joking that Kit, who is somehow playing both drums and keyboards at one point, can take any instrument that's thrown at him. What he does, and Sam's delicate accurate guitar work does too, is allow these songs the space to breathe and for Beth's stories and the way in which her intonation accentuates the message of the songs to shine through. 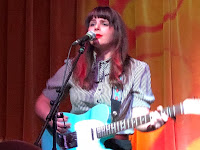 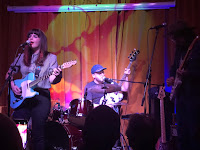 "This is by someone you've probably never heard of, he's called Bob Dylan" jokes Beth as she introduces her version of Blind Willie McTell, a song that she takes and makes her own without losing the original in the process. She finishes with two originals, What We're Giving and Promised Land and by this point she's got the audience eating out of the palm of her hand. It's taken a while for her to make it to Manchester, but there's a room full of people who hope she'll be back soon.

Beth played When I Woke, I Tried, Map And No Direction, All Along, Thunder And Rain, Mountain Sun, Sweet Time, Blind Willie McTell, What We're Giving and Promised Land. 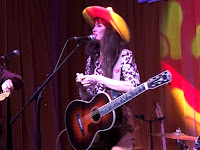 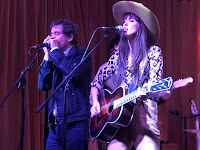 It's a tough act for Jaime to follow, but she's clearly not one to be intimidated. Open and disarmingly honest in her unmistakable LA twang about the subject matter of her own songs that make up her album Felony Blues, she talks about how her time in prison shaped her and her songs and how both Merle Haggard and Waylon Jennings, both of whom she covers two songs from, have influenced her music and outlook. Branded Man, in particular, by Merle is, as she tells us, incredibly personal to her as it's about being condemned for something that happened in the past.

The Manchester crowd fall for this, but when she sings the deal is totally sealed. There's a warmth, humility and self-awareness to the likes of Giving Back The Best and Wishing Well that makes this relatable as her songs are very clearly about her own experiences and observations especially when she dedicates newer song By Your Side to her father and a close friend she lost last year.

She's accompanied by Mark on bass and Joe on guitar whilst Kit from Beth's band takes up drumming duties. They add light and shade and impressive guitar work to the songs which enhance the recorded version in this intimate environment. She's joined by the seemingly ubiquitous Clive Mellor for a couple of songs who blows us (and her) away with his harmonica playing on songs he can't have heard more than once. That improvisational quality comes through later as Sam and Beth are invited on stage as well towards the end of the set. 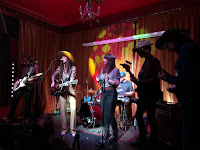 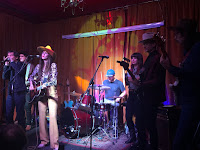 She finishes her main set with latest single Wasco, about her cellmate's relationship with a male prisoner elsewhere, and she introduces it with a warmth that draws us in and makes us feel part of the story. Her music has the same effect too as the stage is full of all the night's performers. She's not going to be allowed to leave without an encore, so her second Waylon Jennings cover is a track about Muhammed Ali called Here's To The Champion that was recorded after his death as part of a tribute.

Jaime played Wishing Well, Stone Hotel, Misery And Gin, Giving Back The Best, From Outer Space, By Your Side, Lonesome On'ry And Mean, Ain't Enough Whisky, Branded Man, Your Loving Saves Me, Wasco and Here's To The Champion.

Whilst Beth and Jaime might not be household names here, or back home, they're two of the most engaging artists we've seen in a long time. With songs that have a real direction and continuity of purpose flowing through them and delivered by musicians with an innate sense of how to add to them, the audience let both of them know at the end of their respective sets just how impressive the double bill has been. Hopefully we'll see both of them back soon.

Beth Bombara's official site can be found here and she is on Facebook and Twitter.  Read our interview with Beth here.

Jaime Wyatt's official site can be found here and she is on Facebook and Twitter. Read our interview with Jaime here.