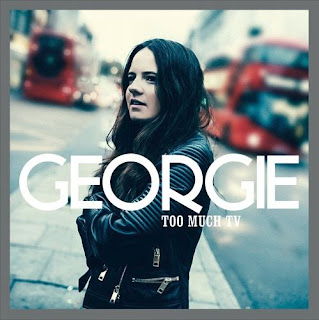 Georgie releases her three-track EP Too Much TV today. For someone who burst to our attention as far back as October 2015 (and indeed featured in our top tips for 2016), it's been a seemingly long road to this point, but as she tells us, she's been busy building a body of songs and working with some pretty impressive people along the way.

This is the first three-track EP you’ve released since signing a major deal a couple of years back. Does it feel liberating to be putting music out there after all the hard work behind the scenes?

Yeah, super liberating and these are songs I love and are super excited to put out. I've been writing like crazy and that's always a part people don't see so to then later share it with everyone through releasing music, that’s a great feeling!

You recorded with Matthew E White out in Virginia last year. How did that come about and how different an experience was it to recording in the UK?

He heard one of my demos and became a fan which is crazy. He then invited me out to Virginia to record which is even crazier haha! It really was a great experience so far from home here in Mansfield. Being around those great musicians and enclosed in a space like Richmond, Virginia, the vibe's different, the sun's shining, it was great!

Could you tell us a little of the back story to the three songs on the EP please?

Too Much TV the lead track is one of my most precious songs, its very personal but also very universal. I think in today's culture' you know that TV culture and that feeling that we all have to pigeonhole ourselves and belong to something, the truth is we all belong to the same thing anyway, so just be yourself, love yourself!

Be The Fire I wrote 3 years ago. Again it’s personal about loving something and fighting for it! Wildcat is kind of the same thing about being crazy for something even though you hate it, but you can’t keep away!

Do your songs tend to be autobiographical or do you write about observations of others?

It’s a bit of both I’ve always been observant and I’m always taking notes, I’m so intrigued and sensitive to other people’s lives. People are fascinating, emotions are fascinating and collectively we all probably felt a lot of the same emotions at some stage. But I have a lot to get off my chest too and luckily I can put it all into my music. I don't know how I'd say these things otherwise!

As well as being a musician, we understand you also had ambitions to play professional football. Do you still play or has that had to take a back seat to music?

I did yes haha, but I hung up the boots when I picked up the guitar. I don't get to play much these days unless I get a kick around with my nephew. I still play tennis though which I love. It's nice to get out and think about nothing sometimes, which sports can do.

You’re out on tour with Jake Bugg at the moment, how has that experience been and what have you learnt most from it?

Amazing yeah, every show I do with him is a real great experience and always a lesson too. He’s inspiring to watch too with his level of passion and showmanship. I've learnt a lot especially that composure of being on a big stage and enjoying every minute with the crowd.

What are your plans for the rest of the year? Can we expect a Georgie album and headline tour?

There's so many songs that I’m ready to put out so its a case of keeping eyes and ears peeled and definitely more shows. I’d put songs out every day and play shows every night!