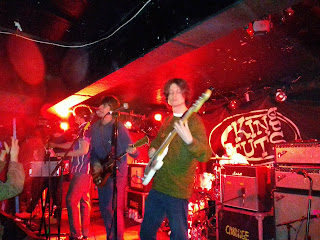 Stuart Ralston ventures back to his old stomping ground to catch another mesmerising performance from Cabbage as they prepare for the release of their album Nihilistic Glamour Shots.

It's 27 years since I first visited King Tuts, the infamous Glasgow venue. As I sup a pint of lager, it strikes me that the bar staff probably weren't born when I had my first drink in here. Nothing much has changed in the intervening years, although I'm somewhat dismayed to find that they've stopped selling Glasgow's premier pint. However, the following hour of Cabbage makes up for it.

Shuffling on-stage, like a group of Mark E Smith's nephews, the Cabbage boys have the audience eating out the palm of their hand from the off. Tonight's set draws heavily on the fine body of work already issued with only a few nods to the debut album, due at the end of March and features Joe as front man more prominently than Lee tonight.

Recent single Arms Of Pleonexia kicks the show off before a rousing Necroflat At The Palace which sees Lee and Joe going flat out. The Pistols / Joy Division influenced Fickle slows the pace down yet retaining a huge amount of swagger and confidence.

Terrorist Synthesizer gets the best response from the heaving crowd and sees them singing along to  Eoghan's guitar intro. Terrorist Synthesizer is like a terrace sing along before new one Obligatory Castration – the band almost sound apologetic that they are plugging their new record as both they and the audience are having such a ball enjoying the old ones.  Obligatory Castration fits right in though and is delivered at breakneck speed, going down well with the crowd. 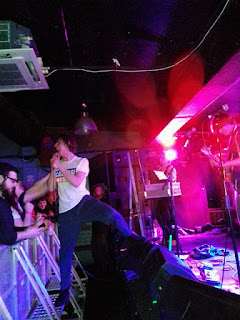 Dinner Lady makes a welcome return to the set and this, along with songs like Kevin, really set Cabbage apart from so many other bands. Sure they have swagger, confidence and belief but they also have something to say and have a chemistry and intuition too.

Preach to the Converted, from the Nihilistic Glamour Shots album sounds like The Fall from the mid 80s, which is no bad thing. At 2 and a half minutes, it doesn't outstay its welcome and has an immediate infectiousness. Moltov Alcopop has some great bass from Stephen. Before Tell Me Lies About Manchester sees the crowd chanting along with the old skool drum machine intro. Tell Me Lies... is a departure from the rest of the set given its reliance on synth.

Dispensing with an encore, instead we get Dissonance as a bonus track with Lee and Joe duelling on vocals before the explosive Uber Capitalist Death Trade rounds off the show and the crowd love every minute, being invited to join in with the chorus by Lee. It's organised chaos with additional lyrics of “Fuck The Scottish Sun”  thrown in for good measure.

Whilst the new songs tonight fit seemlessly into the set, tonight is a celebration of the past 2 years. The Cabbage adulation continues to grow although Lee seems to think that the Thursday night crowd are a little subdued, however the reactions of the crowd by the end said it all. Fans young and old travelled far and wide to be here tonight and the bloke next to me even brought along a huge tape recorder to capture the gig in all its glory!
Cabbage are on Facebook and Twitter.