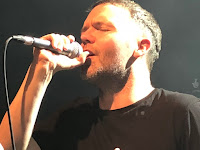 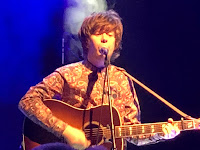 The Slow Readers Club opened up their pair of Independent Music Venue week shows and Bury Met's program with a sold out in minutes show in the splendidly refurbished Derby Hall on Thursday night. Supported by Bolton's talented James Holt, they surprised the audience by playing their album Cavalcade, that was recorded in the venue's studio three years ago, in full as well as a trio of old favourites and a couple of new tracks from their forthcoming third album.

This is our first visit to The Met since its multi-million pound refurbishment and our trepidation that many venues lose their character once they have money spent on them is soon allayed. Inside the two rooms themselves, they're remained completely true to the venue's structure and feel and invested in the sound and lighting facilities without compromising the original beauty of the building. It's an impressive job they've done.

James Holt opens up proceedings and immediately strikes up a rapport with the audience, telling us the stories behind songs like Alone Again, Where The Wind Blows and in particular the charming tale behind Come Out To Play. It's been intriguing to watch him grow from a shy young man to someone who looks and feel confident up there and playing to a Slow Readers Club crowd that's pretty knowledgeable is a win-win situation for him because his articulate, intelligent and emotional songs strike a chord that might not be the case with some audiences who see support bands as a chance to finish an inane conversation. The Met's sound allows us to hear every nuance in the songs too, and James has plenty of those, his MA with distinction in Music meaning that these songs have a structure and intensity throughout. He finishes with what's become his signature song to date Whatever Happened To John? and he's won a whole new set of admirers. 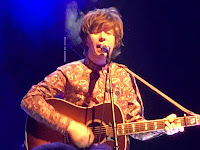 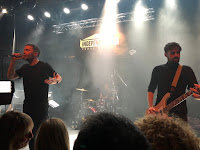 The READERS voices are in full flow by the time they make it onto stage and Aaron makes the announcement that they're going to play Cavalcade in full as a one-off surprise. This leads to much mirth during the gig as they joke about not knowing the order of the album. It also means that many of the songs that tend to make up the final section of the show like Forever In Your Debt, Plant The Seed and I Saw A Ghost are by default played towards the start, but it also gives the likes of the rarely played Here In The Hollow, which Aaron tells us was James' favourite song of theirs but which they never played whilst touring with them, and Secrets chance to shine. It also reiterates just how great Cavalcade is from start to finish. This show is sort of acting as a farewell to it as they're about to embark on the promotion for their as-yet-untitled third album that they've just finished in this building.

On a Facebook group someone described the gig as (we paraphrase) "Interpol turning up and playing disco tunes to a set of Happy Mondays fans" and once we stopped laughing at that, we sort of get their point. The all-black attire and the dark nature of the lyrics might have them down as doom merchants, but the music turns the songs right round and four hundred pairs of hands raised, punching the air, clapping along, is not the sort of response you'd expect from songs with lyrics "I am broken, I am seasick, I am feeling cursed and some would say that's more than I deserve", but that's what they do and that's why they make a connection that's resonating with an exponentially growing number of people as reflected in their recent landslide Manchester Evening News breakthrough act poll win. 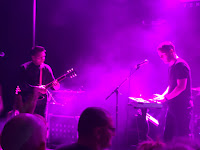 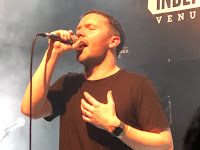 There's a sense as well here that this is the last time that we'll see them in venues of this size, the ones that have witnessed their development from minor cause to one of the biggest emerging bands in the country right now. They still manage to take the power, precision and connections they've made in rooms much bigger than this and distill it down into something extremely intense. It's aided again by the light and sound show that accompanies them where we see just how well The Met spent their money.

The encore is a mix of old and new. Sirens, Feet On Fire (which beats One More Minute in an audience vote) and Block Out The Sun are a reminder that they've got history that was once ignored by most, but which forms an equal part of what they are. They finish though with two new songs. Opened Up My Heart, surely the next single unless they've got an equally ace ace up their sleeve, is set to widen their reach still further. This audience is aware of it already and when it reaches the "believe enough to lose control, where there's love there's always hope" line that's sure to set academies and festival fields alight this year, they know what's coming and raise their arms in salute. They finish with Lunatic, a song that has done its work with an initial bang and then simmered for the past few months to the point that it's now the centre point of the audience reaction and a fitting finish to a special night.