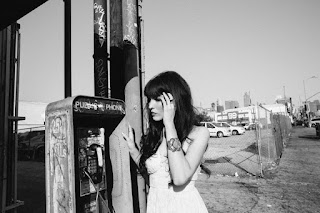 Jaime Wyatt is in the middle of a UK tour that calls in at Gullivers in Manchester on Tuesday with Beth Bombara in support of her album Felony Blues, a record that talks of her time in jail and stories observed and built from those experiences. We spoke to Jaime ahead of the show to find out more about her, the record and her inspirations.

The title of your album Felony Blues is a very personal one. Could you tell us a little about how the album came to have its name?

Well mine is a story of misspent youth, self-drugged and depraved, I robbed my heroin dealer while down on my luck in my early 20’s. I served 8 months in LA County fighting 3-6 years in prison, but took a plea bargain for a Felony Strike 211 Robbery, 6 months treatment and 3 years probation. I began writing a couple of these songs while in jail and the others resulted by life after the institutions and the struggle of having a Felony on my criminal record for the rest of my professional and personal life.

I am a huge Merle Haggard and Cash fan, who have both been busted and later discovered David Allen Coe’s Penitentiary Blues which inspired the title.

Was it a conscious decision to use your experiences in jail to direct your songs or did that come naturally in the songwriting process?

It was just me processing my life and coping with my realities. That said, I’ve always felt like my songwriting gift was given to me so that I could help empower myself and others. I think “Stone Hotel” was certainly a slight at the powers that be, for making a mockery of the justice system and my life. There are so many stories like mine and more with much worse injustice which should be vocalized, so we don’t continue bullying the under classed and less fortunate citizens.

Have had you had any experiences of people who've been through similar to you contacting you about them because of your music?

Yes sir, I’ve gotten some messages and folks at shows who are either seeking help for their vices or share a laugh with me about their criminal records. I get folks that come up to me all the time who said they did time - I’m especially honored when folks who did time at Wasco come and say hi. It's good to talk about our transgressions I think, I always like to hear from folks who have paid their debts or wanna talk about cleaning up their acts.

And have you had any negative reaction to the contents of the songs?

Well for the most part, no. I expected much worse. That's the upside of being a pessimist. But I’ve had a few people think it was a gag I made up and called me a poser! I wish it were made up sometimes, only because of the struggles I’ve encountered, but my story is true unfortunately.

You'd had a couple of record deals as a teenager that didn't work out. How does it feel to be out here playing music after the industry had turned its back on you?

I feel very humbled and honored at the shows and opportunities I get blessed with daily. I am always surprised people care to hear me out and are moved when I perform. I’ve gotten so used to flying under the radar and failing, it is surely an act of God that a lowly drug addict and criminal like myself be given such opportunities. I’ve had to pay my dues, sleep on floors, eat nothing, kick drugs, work 24/7 and fight to keep moving forward, but after some time and proving myself, people have been quite supportive and understanding of me.

Who have been your biggest inspirations to continue to pursue your music, both personal and professional?

Well I’m really lucky to have some amazing friends who have my back and would take a bullet for me, really too many to name everyone. My mother never gave up belief in my musical abilities and destiny. My sister and brother in law have lent time, talent & money to help me stay inspired. And in the last couple years, I went through some gnarly life shit, but my manager Adam Barnes, label (Eric Corne of 40 Below) and dear friends Misty & Shooter Jennings stood by me and gave me time to bounce back. But countless musicians have taken shitty wages to play in my band, fans have bought my merchandise once and twice, promoted my music and put me up on their couches, gave me clothes and helped me get from town to town as a result.

How did the opportunity come about to play these UK dates and what live set up will you be playing with on the tour?

Now I could have this all wrong, but I believe it was through Proper Music and our European label release which connected us to At the Helm promotions (James Walker & Jeremy Verrall) who booked & promoted the tour. They linked me up to the lovely and fiercely talented Beth Bombara, with whom we are sharing a van, drummer (Kit Hammond) and tour manager (Peter Christoperson) while zig zagging the UK! I snagged a fantastic English bass player, Mark Lewis from Manchester and a young ripping English guitar player, Joe Coombs of Yeovil!

What are your plans for the rest of 2018. Are there plans to return to the UK for more dates?

I have a show in Spain in July, so there is talk of hitting the UK while I’m on this side of the pond again. Fingers crossed, as I love it here!

If you had to describe your music to someone who'd never heard of you before, where would you start?

70’s country music with rock n roll attitude and R&B undertones. Some folks say hillbilly soul or Fleetwood Mac Country. but I definitely fit in with the outlaw country folks:)