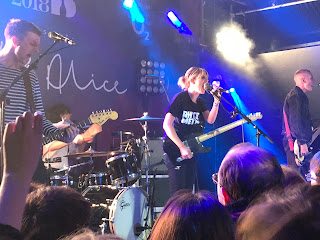 Wolf Alice played one of the most intimate shows they're likely to play for the rest of their careers at Manchester Gorilla on Tuesday night in aid of War Child. Despite technical problems that forced a twenty minute intermission and threatened to derail the evening before it had got going, the evening ended in triumphant with five hundred lucky ticket holders singing back every word of tracks from both their albums My Love Is Cool and its follow up Visions Of A Life.

The tension seems to build forever as stage time approaches. An inspirational talk from War Child CEO Rob Williams and one of their young advisers Leila who survived being born into the Bosnian war of the early 1990s preceded the show as did the instruction to both people in the room and Facebook Live viewers to donate to War Child by text or computer.

The roar as Ellie, Joel, Joff and Theo take to the stage is one of the loudest we've heard in this place and that level of audience response is one that never drops throughout the night, whether it be the deafening roar between songs, the singing that threatens to drown Ellie out at points and the mosh pit that threatens to take over the whole floor, with young girls and middle aged men and everyone in between joining in a celebration of a band that makes a special connection with the audience. 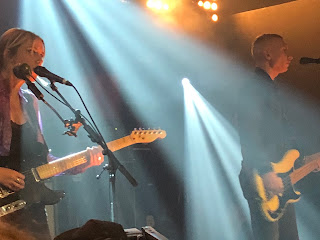 They start with the trio of Heavenward, Yuk Foo and You're A Germ which delight the ecstatic crowd, but it's clear between songs that there's something wrong with Joff's guitar set up and rather than furrow on, they take the decision to resolve it before continuing. It takes twenty minutes to resolve, longer than they'd intended, but we do only lose one song from the set list as a result.

Moaning Lisa Smile and Your Love's Whore soon get us back on track and have girls on people's shoulders in the middle of the chaos of the mosh pit. One look around at the way they're singing back these songs shows what an influential and inspiring band Wolf Alice have become in a relatively short space of time. Then you look at the strength of the set list and the songs that have made up those two albums which make up the eighteen song set and the reasons become clear. 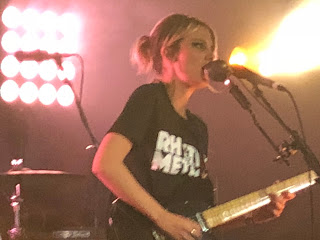 Don't Delete The Kisses is of course the highlight, in our view one of the best songs of the decade so far, a brilliantly observed tale of falling for someone and not being able to find the words to tell them despite it being obvious to everyone but the two people involved. As well as striking a chord with the sentiment, when Ellie breathlessly declares "I might as well write all over my note book that you rock my world" we're all singing along with her, such is the universal meaning of the song.

Very early on in their career Clash Magazine described them as "the lovechild of folk and grunge" and as they power through a set including tracks such as Bros, Lisbon, Space And Time and debut single Fluffy which concludes the main set, that evaluation feels perfectly apt. Josh plays the agitator, constantly encouraging the audience to commit deeper and at point declaring their love for Manchester telling us "we don't come from here, but we should have done". The Vision Of A Life songs, Beautifully Unconventional and Formidable Cool in particular, pack a harder, more experimental edge to them without dismissing what broke them in the first place. 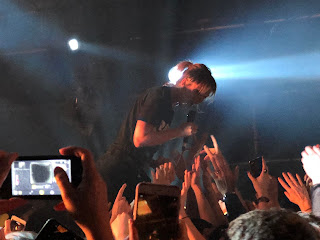 The encore, demanded by a unsated crowd, starts by going back to almost the start, a beautifully hushed rendition of Blush from their debut EP of the same name being followed by a raucous, rampant version of My Love Is Cool's lead single Giant Peach, which sees Ellie stood astride the barrier, leaning forward over her now drained and drenched but delighted devotees.

Tonight was, as the War Child gigs proclaim, Wolf Alice going back to their roots. Whilst at times the power they generated threatened to overwhelm both the technology and Gorilla's sound system, it delivered on its promise of taking big bands back to smaller venues and, as our compere rightly reminded us, most importantly raising hundreds of thousands of pounds to support children in war zones.

You can donate to War Child and find out more about their activities on their website.