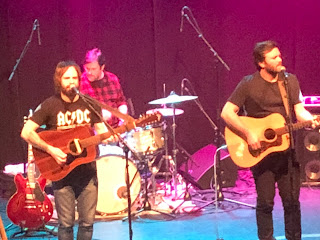 Concluding the first leg of their UK tour in support of their All On Red album, Orphan Colours delighted an appreciative crowd at Bury Met on Wednesday night with a set laden in rich harmonies and impressive musicianship culled from that album, their previous two EPs and a few new songs and delving back into the catalogue of Stephen Llewellyn and Dave Burn's ahab project and Dave's solo album.

This isn't your traditional set from a band that just two weeks ago released their debut album. Orphan Colours' history goes deeper than that; a band formed of members of ahab, Danny And The Champions Of The World and Noah And The Whale with a formidable back catalogue of songs under other names, many of which make up tonight's set. There's also a few new songs thrown in for good measure as the band's creative juices didn't stop flowing on completion of the album and the interminable wait from that to its ultimate release. 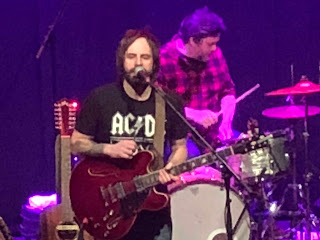 What's immediate evident is just how much effort is put into the detail of the songs performed, irrespective of who originally released them. The five musicians on stage gel together perfectly and the performance is almost flawless in its execution, the songs imbibed with a genuine feeling of warmth. They set their stall out by opening with a new song called Free and conclude with an encore tribute to Tom Petty. In between we're treated to a mix of songs like Lonely Lately, Sun Is Rising, High Hopes and new single Goodnight California from All Colours Red that show just how coherently this line-up interact, but then also ahab songs such as (the unreleased) Radio and Uptight as well as songs from Dave's solo album. 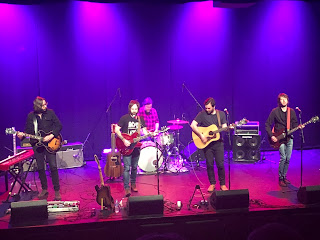 They're not afraid to mix the sound up too; one minute quiet introspection, the next rocking out like they really mean it, particularly in the second of their two sets once they let loose and the volume is turned up. It's all very good-natured too; whether it be in-jokes in the band that the audience feel party to, or tales of the tour so far or interacting with the audience. The real charm though, the thing that had us swooning at their feet, is the combination of the voices, how harmonies and backing vocals lift some of these songs out of the ordinary into the special. The impact is enhanced by the fact it's done so naturally, rather than trying to create an impact, it's the product of musicians with a natural talent, flair and an instinctive relationship.

The hour and a half flies past in a whirl, such is the way we're drawn into what they're doing. Their intensity is a gentle one, but that makes the experience even more pleasurable, being slowly seduced by the five-piece's art rather than being bowled over by volume, power or swagger.

The album can be pre-ordered from At The Helm's website.