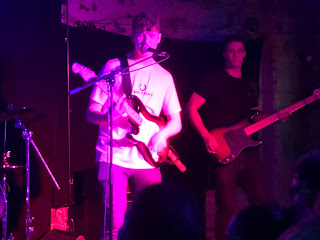 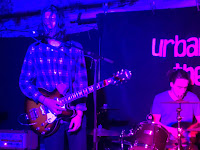 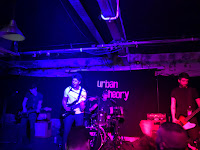 Urban Theory continued their rise with a sold-out show at Soup Kitchen in Manchester on Saturday night. A packed crowd witnessed a strong set from a band that's standing out from the crowd of bands on the Manchester scene at the moment with some rough and ready live sets with an anger and an edge to them. Support came from Manalishi and Provocateurs.

Provocateurs couldn't have picked a more apt name for their band. Hailing from the streets of Stockport, they've brought a gang of mates with them, two who end up on stage at one point, so Soup Kitchen is busy right from the start of the evening. This helps create the atmosphere for their set of songs that aim to get people moving around and that's exactly what happens. They're not the finished article by any means, but they've got a raw intensity that connects with more than their mates. Songs like recent single Fall For You and Heart Out and their next single which we don't catch the name of have all the seeds of something that's going to connect further and wider than this.

Next up are Manalishi, another four-piece from Manchester, and they've also brought a decent crowd with them. Their songs are full of explosive moments that burst out of nowhere and take the song off in a different direction. Single Standard Paranoia is one of the stand out tracks of a set that shows them all to be accomplished musicians, but with the savvy to know that you need to get an audience excited and involved in what you're doing. Front man Dom cuts an imposing presence as he and the band ensure that the bar has been set high for Urban Theory. 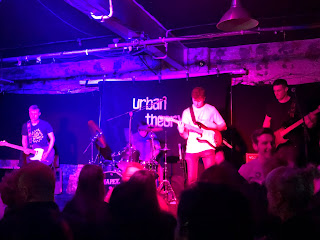 Not even a false start can derail Urban Theory tonight though. Whilst most of the bands at this level strive for perfection in everything they do, it's the rough edges that make Urban Theory arguably the strongest of the lot. Front man Alex isn't a great singer in the traditional sense, but then neither are many of the world's most celebrated ones, but what he has is an attitude and a passion in his voice that comes across in every word as the band's stabbing rhythms and jagged beats pierce through the atmosphere in this dark and dingy basement venue.

Their name is appropriate too. These are songs about growing up in a town where opportunity is rare and getting by is an achievement. Weekend Offender, Knickers and Fishbowls and Headfuckers are about that feeling of escapism from the daily drudge of becoming an adult with no money and living for the weekend, told with an acerbic wit and a sharp eye for observation and delivered with a punch to the face and a knee to the groin in the one swift movement. When Alex sings "I can't be arsed with people talking to me" during Fishbowls, you know he's been there and he means it. And the response he gets back tells us that he's made the connection with it too. He and his band mates are a gang, their songs are about being a gang and their growing army of fans are an extension of that.

Their opening track Snowstorm and False Delivery which is dispatched midset are signs of how they're developing continually and at an exponential pace, and in Mandy, with its immediate "I want to slowly fade away" chorus, they've got that surefire killer single that every band needs and only the ones that make the breakthrough possess.

It's eighteen months since we first reviewed them opening up a show here and they've now got a cocksure arrogance in their ability that was lacking then. Their recent big show at Gorilla with Ist Ist won them a lot of admirers from a notoriously difficult audience that wouldn't necessarily go for this and tonight they win over any lingering waverers. But there's a directness at play here, a mix of influences from the punk age of The Ramones through the grunge of Nirvana to the northern street wisdom of Arctic Monkeys that permeate but never dominate what Urban Theory are doing. They're real kids, writing about real experiences and delivering them without any hint of pretence or trying too hard to be something they're not. They're rabble rousers, here to tell us how it is and shake things up and that's what makes them stand out a mile.

They play their next headline show at the Deaf Institute in Manchester on May 19th.