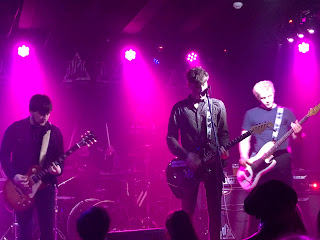 Matter Of Mind's biggest headline show to date saw them take over Manchester's Rebellion on Saturday night. A set full of old favourites and new songs showed them to be a band that's very much on the rise. A bold sound, deeper into hard rock territory than most of their contemporaries, yet with enough hooks and melodies running through the songs to appeal to more mainstream tastes. With a new EP in the can, 2018 looks like it could be the year that they break to a wider audience.

It doesn't go all to plan. Jordan has issues with his guitar that threaten to derail the momentum of the set, but you sense its their perfectionism that allows this to be the case because what we hear out in the crowd doesn't betray any problems. Where Matter Of Mind stand out is that they've got a set of songs, and one that's growing rapidly in number, that feel like they're made for big stages, big pyrotechnic shows and thousands of people singing them back in unison.

The ability to capture in a few words something that talks to anyone and everyone is something most lyricists never achieve, but there's already a couple of tracks here - Sunken Revelations and Far Too Wrong - that do just that. The latter, stripped down at the start to give it even more impact the moment the chorus kicks in, the line "I couldn't be more different if I tried" a calling card to the disillusioned uncertainty of growing up, but also telling people that it's OK because as people sing along to it you know you're not the only one. 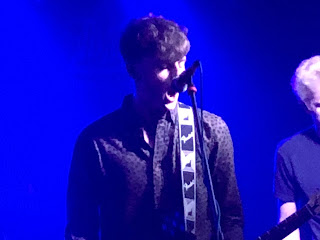 They've developed now into a formidable act, they've worked on the visual aspects of their set, at one point Jordan, Rob and Ash bouncing in unison encouraging the crowd to do the same. With drummer Conor pretty much sharing lead vocals with Jordan on a couple of tracks, disproving the old adage that drummers should never be given a mic. Jordan now plays the front man role with relish, having grown ever increasingly confident as the band make deeper connections with the crowd and with his voice stronger than it's ever sounded, particularly on new songs like their opening track, It's Obvious and Sparks In The Blood. One of their earliest tracks, a reworked version of Blindside, feels like a new one too, such is the scale of development they've undergone in the past two years.

They finish their set with a raucous version of their most recent single Stay, a song that acts as a final calling card for a band that's getting stronger with every gig and every release, one that's ready to step up and play with the big boys.