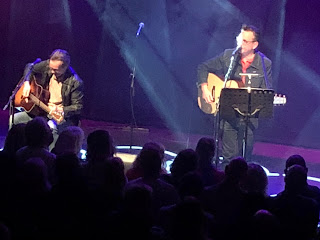 "Bury's very own", as he described himself" Liam Frost is an inspired choice of opener. With a new album in the pipeline with his Latchkey Kids project, it's the perfect opportunity to roadtest them with an audience that might not be familiar with his work. The songs stand up against anything he's done before, either in his own name or under a collaborative one, and that's setting a pretty high standard given he released Show Me How The Spectres Dance and We Ain't Got No Money Honey But We Got Rain. Forthcoming single Smoke and its predecessor The Slow Knife have a rich depth to them that the Met's crystal clear sound set-up allows to shine through, whilst Skylark Avenue, dedicated to someone who requested it on Twitter, is the sole reminder of his past. His vocal style, intense with an accentuation that shows he's proud to be where he's from, simply makes the songs feel much more personal and relatable as does his between song chat when he remembers coming to emo club nights in this hall as a teenager. 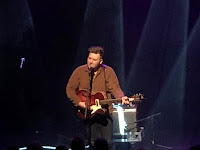 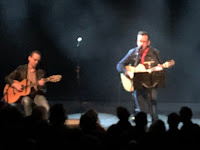 The hall has filled up for the main act though, and for all the stunning guitar work that's accompanied Hawley's live shows in the past few years, there's a belief in this writer's head that this is how he can be most appreciated, where everything is stripped back and you can hear just how these songs were created and brought to life. The set leans heavily on two albums - Lady's Bridge and the remarkable Truelove's Gutter - starting with two songs from the latter As The Dawn Breaks and Ashes On The Fire and save for one guy downstairs who seems to want to hear his own voice more than Richard's but is soon put in his place, there's a awestruck silence in the room that just adds to the intimacy of the evening and adds poignancy and potency to the songs.

Richard's on good form as ever, slightly shy at the adulation thrown his way when thanking us for coming, but also humourous and not short of a put-down either to the audience or to himself. He jokes about the Bury accent, after deliberately pronouncing it wrong all night, talks of pub crawls with Guy Garvey ("a short walk") and reminiscing about meeting Clive Mellor in the Castle Hotel in Manchester a six-hour drinking session between an in-store and a radio session (with a lovely tribute to Cath, the pub's now-departed landlady) as well as asking for recommendations to drink after the show and being unimpressed by Yates as a suggestion. He talks of the emotions behind songs with a wicked sense of self-deprecation like For Your Lover Give Some Time (written for his wife "to get a shag" which got the response "what's for tea") and his daughter leaving home for the first time in What Love Means.

There's a real contrast in some of the setlist choices, even though there's no dip in quality, the more upbeat moments such as Tonight The Streets Are Ours (preceded by a reminder that the Tories were formed by Bury's Robert Peel), Serious (where he asks if anyone's shagged a mannequin in a tracksuit as Shane Meadows made him do in the video) and a gorgeous yearning Just Like The Rain that concludes the main set contrasting with more recent material such as Leave Your Body Behind You, Standing At The Sky's Edge and Heart Of Oak, where there's judicious use of a backing track to build the atmosphere. There's also a couple of covers, one of Buddy Holly's Words Of Love to commemorate the anniversary of the "day the music died" where Richard laments that there should be statues of Buddy Holly everywhere had he not met a tragic end, and the evening's final song Son Of A Gun, a Sanford Clark cover.

One disappointment is the lack of new material which would have topped off the evening, particularly as it felt that the atmosphere and audience attention would have been conducive to it, but that's a minor quibble given that for an hour and a half, the audience were held by rapt by a performance of such beauty from one of the country's foremost songwriters in a venue that could have been designed just for this occasion.