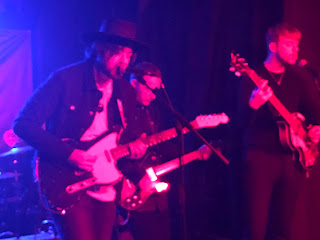 As part of Independent Venue Week celebrations Control Of The Going played a six-song set of tracks from their forthcoming album I Love You But It’s Going To Rain at one of Manchester’s newest venues Night People.

Opening with Family, in our view their best song, Control Of The Going set their stall out early. It’s an uplifting song of communion, of coming together, the family being the loose collection of people that make up the gig-going community that has supported them and other bands like them this far. It’s unfussy and uncluttered, some achievement given there’s six of them including three guitars, driven along like most of their songs by a hook to which the song returns. The chorus talks of “music saved my soul” as backing vocals lift it up and out of its skin. There’s a breakdown that allows the band to break out from under Liam’s unmistakeable vocals, half California dreamer, half Tameside brawler.

You’re Mine is a reworking of an old track (In Line) and envelops us in a psychedelic swirl of guitars and keyboards. There’s none of the performing hysteronics in this band, but there’s an intensity that the songs demand and once again the chorus backing vocals give the song a lift. 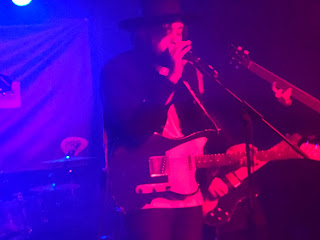 Sell Your Soul is a little less immediate and obvious, but simply allows the band to take centre stage. Similarly Love You More sees Liam’s vocals almost act, chorus aside, as an instrument rather than the song’s lead, giving it a dreamy far away feel of warmer climes.

Star and She close the set and see Control Of The Going lift their influences out of west coast USA and shower them in Tameside rain. Star is ambitious, soaring and sure of itself, much like the way the band themselves have blossomed.

She, the song that’s brought them so much deserved recent attention, makes its presence with an opening guitar salvo that ushers in Liam’s rushed urgent vocals. The song then takes on a life of its own, soaring off into some far off other world that bands from this city don’t usually inhabit. It’s the way that they fuse this together as the song stops and then comes back in that makes them such a refreshing diversion from the norm.

Control Of The Going played Family, You’re Mine, Sell Your Soul, Love You More, Star and She.

They launching the album with an instore at Altrincham's Honeybeat Vinyl Cafe on February 23rd and on home territory at Ashton-Under-Lyne Witchwood on February 24th.