TRACK OF THE DAY : Say Sue Me - Old Town 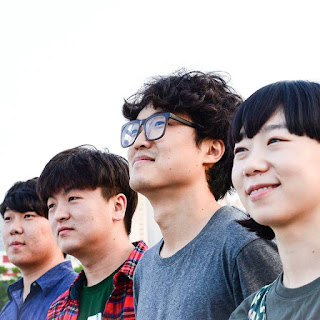 Old Town is the lead track from Say Sue Me's forthcoming second album Where We Were Together. On first listen you might mistake it for some California surf-pop band such are the uplifting melodies and harmonies than run through the song, but dig deeper and you'll find they hail from an unlikely location for such gloriously carefree tunes, Busan in South Korea.

Busan is the old town in question in the song, the lyrics musing "Everyone left this old fucking town
Only I'm getting old with this town. I just wanna stay here. But I wanna leave here" With a UK tour planned with a mix of headline dates and support slots with Japan's Otoboke Beaver.

The album When Were Together is released on April 13th on limited to 200 copies turquoise vinyl, cd and download available from their Bandcamp page. Their debut self-titled album is also available on cd and download with bonus tracks.

Email ThisBlogThis!Share to TwitterShare to FacebookShare to Pinterest
Labels: Say Sue Me