Control Of The Going - I Love You, But It's Going To Rain 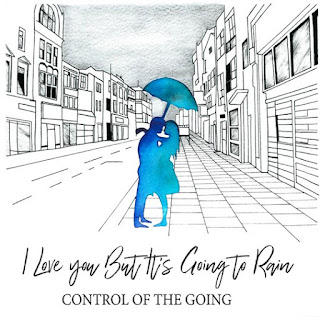 I Love You, But It's Going To Rain is the majestically-titled debut album from Control Of The Going, a band that's blossomed from the slightly awkward kids that you'd see at every vaguely psychedelic gig in town to one of the leading lights in that very scene that they belonged to. They've naturally spread their wings further afield as this record demonstrates, its real power and beauty in the way they've taken their influences, span them round, put their own twist on them and made something so ambitious, widescreen yet still peculiarly (Greater) Mancunian in its impact.

The rumbling guitars that usher in opening track War Crime give way to pulsating drums, but quickly come back to reclaim their crown. One of the most immediate observations with the album is the amount of space that producer Dean Glover affords these songs, no mean feat given that there's six of Control Of The Going in action. Liam half sings, half drawls through the chorus, one part dark Californian, one part resembling Ride's earliest work. As we'll discover listening further, they never stand still at any point on this record.

Star is a real juxtaposition, guitars deep in the mix, jangling away menacingly with an imminent threat of blowing you away, with deliciously layered vocals in the forefront as Liam breathlessly asks the question "why won't you be my star tonight?" before almost channeling another famous Liam from these parts as he enunciates the star in the question with increasing intensity. The band then take the song away from him, off into a whirlpool of guitars that feel like they've blindfolded you and turning you round and round until you're dizzy with the impact.

Sell Your Soul also starts with Liam centre stage, with the slow build behind him alluding to what's to come, but here the guitars have a longing metallic edge to them that feels so far removed from their roots. This is of course what makes Control Of The Going unique from their contemporaries, there's no attempt here to overpower the listener, to blast them away with a wall of noise that them being a six-piece would feel like a logical approach. Subtlety is the key here, both in the playing and the production that affords each member the oxygen to allow the songs to breathe

The pace lifts for Love You More and here there's a vocal call and response that forms the core of the first half of the song, Liam seemingly conversing with himself, before the chorus again employs layered vocals to give it a dreamy up in the clouds quality. The guitars then kick in, gently again mind, and take us on a trip around ever decreasing circles.

The Message, split into two distinct parts which sit together on the record, is the oldest song here as it appeared on one of their early EPs, but here it's transformed, vocals are suppressed under the surface where they exist still to the extent that you can't tell what Liam's singing at points other than "can you hear the message" which, we guess, is the intent. It stops dead at two minutes thirty and the last forty seconds of part one feel like an eerie scene from a ghost movie where you're expecting something, but you're not quite sure what. What we get is something more reminiscent of the early version of the song which was the first time they stood out as band that could mean something. It's a world away now, but it's the point at which album shows their roots and the birth marks most clearly.

She is the song you're most likely to be familiar with if you're not already bought into the Control Of The Going ethos. Championed by Clint Boon and radio stations as influential as KEXP in Seattle amongst others, it's the song that changed people's view of them as another Manchester band of hopefuls into a serious proposition. The guitars are much higher in the mix, confident, strident, belligerent in places, building a wall of impermeable sound, atop which sits Liam's coming-of-age vocal. Rich, with a depth of tone and intonation that would surprise those who'd heard their early work.

It feels like then they're on a roll, as if they've looked at the traditional front-loading of albums with the big anthemic songs and turned it on its head. You're Mine is a reworking of an early song called In Line. When we say reworking, it's been injected with steroids, been down the gym and beefed itself up, a gloriously uplifting soundscape crafted by the band that makes Liam's declaration of the title even more affecting.

Clouds and Save My Memories both start with a simple strummed acoustic guitar accompanied by wistful longing vocals, as if we're witnessing a different band at work, but that's the beauty of this record, it's not afraid to change things about. The electric guitars do kick in on Clouds as we hit the chorus, but like so much of this record, they're done in moderation when they could simply overwhelm the songs and once again the production is very clever in that it creates room for everything to breathe. Save My Memories however remains taut, tense and cloying a little longer before bursting into light.

Family is, for us, the highlight of a record full of them. An ode to the scene that birthed them, it's a rolling, raucous, rampant rock and roll song with what sounds like a deliberately muffled production that makes it even more glorious as Liam declares "music saved my soul."

The album finishes with Fade Away, another wistful lament with a genuine warmth to the vocals, declaring "I'll never let you fade away, gave us a future" It's not surprising given the song is dedicated to Liam (and brother, guitarist Ashley)'s Dad who passed away during the writing and recording of the album. It's a fitting tribute to a man who supported the band at every single opportunity and an appropriate close to an album where love, togetherness and forever are recurring themes.

I Love You, But It's Going To Rain is an album you wouldn't associate with a band from the mean streets of Tameside and certainly one that produced the scrappy demos that brimmed with intriguing possibilities just a couple of years ago. It's ambitious without overstretching itself and it captures the band as they should be heard which so many albums fail to do these days. Whilst their roots may shine through in the title and the lyrical themes, this is a worldly wise album, produced by care and attention to every detail, that should reach far beyond the puddle-strewn potholed streets of this town.

Control Of The Going are on Facebook, Twitter and Soundcloud. Read our interview with them about the album here.

They launching the album with an instore at Altrincham's Honeybeat Vinyl Cafe on February 23rd and on home territory at Ashton-Under-Lyne Witchwood on February 24th.