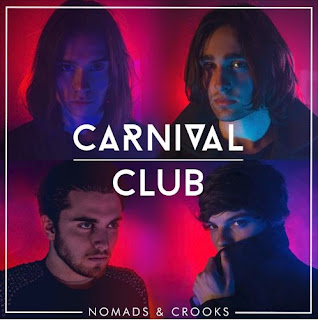 "Carnival Club in a few words would be dirty rock n roll soaked in sci fi" were how their front man Kai Roberts described the band in a recent interview with us. Sin City, the lead single from their forthcoming Nomads And Crooks EP, is the embodiment of that philosophy in three minutes and twenty four seconds. We're delighted to be able to reveal the song exclusively on Even The Stars.

Front man Kai Roberts explained the meaning behind the song to us - "Sin City is our big dance tune, written in August last year. It was our take on getting a crowd to really bounce off us. It's 'arms over your mate spilling cheap beer on your two left feet', we love it. As it was written last year, I can't really relate to its meaning anymore because people change all the time. But it marked a point of change in my life and it's a sing along for all."

Having already made their mark with their debut EP Magdalena's Cape and a series of intimate shows around Manchester and further afield, Carnival Club - Kai, George, Eddie and John - nabbed the sought-after support slot on Liam Fray's acoustic tour in 2017 and sold out iconic Manchester venues such as The Ruby Lounge and Sound Control before recording their second EP, due out on March 16th.

They go on tour to coincide with the release of the EP with dates at Bristol Louisiana (March 11), Nottingham Bodega (12), London Thousand Island (13), Manchester Bread Shed (17), Leeds The Lending Room (20) and Hull Fruit (21).