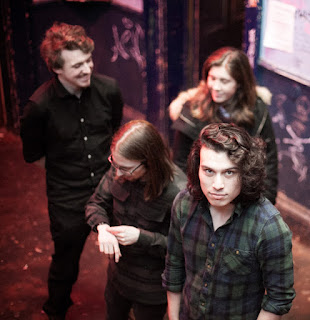 Liverpool-based international four-piece, the magnificently titled The Great Emu War Casualties, have just released the video for their second release Hoodlum Uniform. Set to a frankly disconcerting video, which actually works brilliantly with the song, it's one of the most intriguing left-field singles we've heard so far this year.

The band explain their name thus "The Great Emu War was a 1932 Australian wildlife management military operation. The aim was to prevent the emu population from running amok in Western Australia. The program was a resounding failure as the emus were too fast to be shot. One report claimed that out of the tens of thousands of emus, less than 50 were killed."

“Initially we liked the stupidity in the name and so we played with that when it comes to naming the songs. What we’ve found is that it is much easier to write with honesty and sincerity when cloaking the whole thing in a little bit of a joke. We also figured that if we were emus then we’d have had the luck to be among the vast minority that didn’t make it”

Talking about the song itself, Joe told us "I was really unsure about including Hoodlum as a release because originally it was just sort of private song for me. It’s a song that I wrote about a bunch of things - mostly my brother and his seemingly endless uphill struggle to keep himself out of jail. There are the textbook older brother tongue in cheek references to the time he became a vegetarian for a few weeks and him smoking weed because of all the “stress” he’s under in college."

"I just had it as a little guitar riff and a vocal line and was quite content to keep it at that but then when Saskia and Elliot sent over the demo that they had worked on and it had all the drums, bass and synth included I thought “oh, crap, that’s actually pretty good” and I couldn’t come up with a clever enough reason to keep it unreleased."