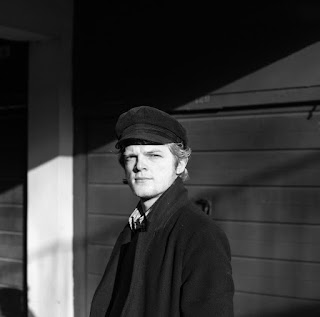 Jack Oliver Monty is a man of many talents with a solo career as well as playing guitar in up-and-coming Maddy Storm's band and Ethan And The Reformation. Julia Grantham caught up with him recently in Manchester to talk about doing his own thing as he found his way in the music business, his upcoming solo album and playing in bands. We also have an exclusive stream of a demo called Please Don't Run.

When Jack Oliver Monty sent me a collection of his latest tracks recently, he wrote: “Sorry to inundate you with this stuff”, but I was quick to reply that I’ve been inundated with a lot worse. I try to avoid it, but it’s hard to shut out the mainstream over-produced and mass-produced by products of entertainment shows that somehow, we’re still allowed to call ‘music’. It continually baffles me: this divide between what the masses are haplessly force-fed, and all the wonderfully passionate, carefully crafted, skilfully performed and created, ‘real’ music. Fortunately, there’s plenty of excellent music around - Jack Oliver Monty’s songs being the perfect example of the opposite end of the mainstream spectrum.

As we discussed his work, influences, musical preferences and relationship to music we were sitting at a table in Jimmy’s, a new but renowned and popular Northern Quarter gig venue in central Manchester. Jimmy’s regularly hosts gigs which showcase up and coming artists - the first being Ethan and The Reformation of which Jack is a band member - and it was fitting to chat to Jack in this venue, after watching him perform with Maddy Storm. Indeed, the setting felt altogether perfect to discuss Jack’s musical work, being a young solo artist too, and a very interesting and exciting one at that.

We began our chat as we listened to 80s pop; the background music being oddly nostalgic of my early childhood as we discussed Jack’s, who grew up in Doncaster, South Yorkshire of which he told me: “There wasn’t really a lot going on, musically, you were either into metal which is cool but not really my bag, or function bands doing covers”. As a teenager he got into Prog Rock, with early influences being Pink Floyd, and David Bowie to name but a few. He quickly realised: “The art in music is in the creation. I wanted to form a band, but I didn’t really know anyone who wanted to do what I wanted to do”. Undeterred, however, Jack surrounded himself with instruments and learned how to play guitar, drums, and piano by gaining access to these because: “They were just lying around in my grandma’s garage”. His early vision was to be a rock guitar player in a band - Eddie Van Halen being his idol as a youngster. Having taught himself how to play and write music, Jack quickly outgrew his home-town: “I felt like a big fish in a small pond” he told me. Already a competent session player, Jack made the move to Manchester, which led to him achieving a degree, and meeting all the people on the music scene that he knows, currently.

As we were talking, it occurred to me what an intelligent and thoughtful artist Jack is. I asked him if moving to Manchester was the best decision he’d ever made, a notion which he quickly rejected and put into his own words: “It’s the most important move I ever made, I don’t believe in best or worst decisions”. A very interesting point. Aside from playing guitar for Maddy Storm and Ethan and The Reformation, Jack is a solo artist. He already has an album written: Vestal Seer and is about to release a folk-inspired three-track demo. His current influences are Nick Drake and John Martyn and the sound is very 60s folk, as John Robb of Louder Than War describes: “It’s steeped in retro and yet doesn’t sound dated, and his songs’ complex melodies already sound like bedsit classics”

The sense I get from Jack, is that he has a very refreshing and wholly important sense of self. Perhaps stemming from those early years as a teenager, not finding or knowing anyone who shared his vision, left him undeterred in doing his own thing, listening to and creating the music he wanted, irrespective of his peers and the norm, and once he landed in Manchester he retained that autonomy and his own unique image, ideas and musicality. Certainly, up on stage today with Maddy Storm, Jack was entirely himself, both in appearance and as a performer. “If I’m in a band, I do me. I do what I wanna do, I’m the only thing I know how to do”, he told me. Is that a lesson for us all, perhaps?