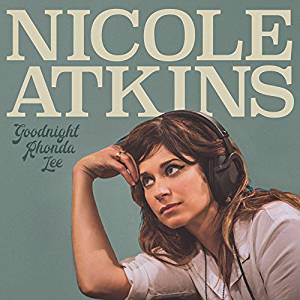 Nicole Atkins' Goodnight Rhonda Lee hit number four in our albums of the year for 2017. She's about to embark on a UK and European tour in support of the record and we managed to catch up with her before she set off to find out more about the record and plans for the next one.

Are you pleased with the response you had to Goodnight Rhonda Lee? Going down the Pledge route without a record deal at the time must have felt like you were stepping out into the unknown.

The response has been really amazing. It's really interesting and cool to see how Rhonda Lee is connecting with people on so many different levels. People have been coming up after shows and sharing how they relate to the songs.

Going down the Pledge route was actually very familiar ground to me. I've been using those platforms since they started. Theyre a great way to connect with your fans and get them interesting merch and have helped me really do what I want creatively rather than waiting around for the "biz" to come around. I like to get things done at the pace I like.

Who is Rhonda Lee? Is she a real person or a fictional character?

It started out as my bowling alias and eventually turned into a nickname for bad behavior. So she is an alias but very real indeed.

Your four albums have been very different in style. Has that been a conscious decision or something that's just happened when you've got in the studio to write and record?

I like to experiment with different soundscapes in the studio depending on what I'm listening to at the time, what players are involved and the studio space. The roots of my sound has always been very grounded in 50's crooner and 60's Brill Building style pop. Each record has been my take on that kind of writing because that's what I like to write. For Rhonda Lee I wanted to get as close in the studio to what the band and I sound like live. Working that way, live, was very fast, present and fun.

This album was recorded as you were moving from New York to Nashville. Did that influence the way you went about it?

Moving to Nashville influenced the sound in the fact that there are more players down here that come from a southern roots and soul background so in a way that influenced the sound. However I wanted the record to have more of a Memphis sound. In the end, I moved from New Jersey to Nashville, made a Memphis sounding record in Fort Worth Texas and released it on Single Lock Records out of Muscle Shoals Alabama. It's a lot of backwards geography if you'd like to make sense of it you can for fun. In the end though, this record is what the inside of my heart and mind sound like so it couldve been done anywhere be it in Texas or Talum, so long as I was there with the right players.

Lyrically, a lot of songs feel like they're autobiographical. Do your songs act as a form of catharsis, of dealing with issues? Or are you writing about situations you've observed.

Almost all of the songs on this record were what I was going through at the time. Family stuff, old wounds of the heart, moving, alcoholism, writers block and in the end coming out on the other side a bit chipped up but mostly better for it.

And how does it feel when others connect with them and contact you to tell you how they impacted on them?

It's a real special thing when others can share in the feelings and situations of the songs. It's heavy.

Does it frustrate you that you're not better known than you are? People don't tend to just like your music when they hear it, but the difficulty is getting it heard.

I guess it could but only for the fact that I would love a bigger stage to run around and sing on. The fact that I've been making a living off of only my music for the last ten years makes me feel extremely fulfilled. But to anyone reading this, tell 10 of your friends about this record and bring them all to my show. Any artist you love can't get known in the real way unless the fans spread the word!

Do you get a different reaction in the UK than you do back in the States?

I think the fans in the UK are a little more appreciative the effort it takes to get all the way over there for shows so in that way it's different. The UK fans also dance a little more and sing a little louder. Or more than I expected for sure.

When you were over in November you were having issues with back and shoulder pain? Has that been cured now, you looked in real discomfort when performing.

Ah yes, I tore my rotator cuff. It was excruciating but I didn't wanna go home and not do the shows. The energy at the shows got me through it. The only time I didn't feel pain was when I was playing. I've done a lot of therapy on my shoulder and back and it's feeling much better. Thanks for asking.

It's been a while since you finished recording Goodnight Rhonda Lee, have you started work on the follow-up yet?

I've been writing like a mad woman and am definitely onto something for the next one already. That's another perk of living in Nashville. If you have an idea or wanna demo, you have the best musicians living next door to ya to help figure shit out. It's so fun.

Nicole's tour calls in at :